January 30, 2013 –HAWAII – Geologists say they’ve confirmed the existence of a previously unknown large, deep magma chamber below Hawaii’s Kilauea volcano. The discovery offers new insight into the largely unknown internal plumbing of volcanoes, scientists at the University of Miami’s Rosenstiel School of Marine & Atmospheric Science reported Wednesday. The finding at the world’s most active volcano is the first geophysical observation that large magma chambers exist in the deeper parts of a volcano system, they said. The scientists analyzed seismic waves moving through the volcano to understand the internal structure of the volcanic system, finding a lava chamber at least a mile in diameter and located at a depth of 5 miles to 6.8 miles. “It was known before that Kilauea had small, shallow magma chambers,” geologists and lead study author Guoqing Lin said. “This study is the first geophysical observation that large magma chambers exist in the deep oceanic crust below.” The magma reservoir below Kilauea is similar to those widely observed beneath volcanoes located at mid-ocean ridges, the researchers said. “Understanding these magma bodies are a high priority because of the hazard posed by the volcano,” said geophysics Professor Falk Amelung, the study co-author. “Kilauea volcano produces many small earthquakes and paying particular attention to new seismic activity near this body will help us to better understand where future lava eruptions will come from.” –Red Orbit

January 30, 2014 – GULFPORT – Over 150 frozen sharks have surfaced on beaches across the gulf coast region due to the impact of Winter Storm Leon on Tuesday according to wildlife officials. The largest area of concentration appears to be around Gulfport, Mississippi, which has seen at least 67 of the frozen animals. Wildlife officials say that the sharks, who migrate to this area during the winter, were caught off guard by the most severe winter storm in several decades. “Like many of us, I suspect the sharks did not believe that the area would actually receive any winter weather,” Mississippi Department of Wildlife spokesperson Matt Shepherd tells us. “It is like a Shark-slushy out there. The animals all appear to be alive, so please do not approach any frozen sharks. They will probably thaw later in the week and swim back out into the gulf.” The number of frozen sharks are expected to increase as the temperatures drop across the region. Officials hope poor driving conditions will reduce the number of onlookers who might otherwise approach the sharks. “Sharks are remarkably adaptable, they have entered a hibernation like state while frozen,” Shepherd tells us. “They can come out of this state and will become incredibly irritated and possibly violent due to the extreme cold surrounding their body. We have already seen one fatality from an individual trying to take a selfie with a frozen shark. We hope to recover his head later this week.” The winter storm is expected to clear out of the area tomorrow and area schools hope to reopen sometime in April. –Rocky City Times

January 30, 2014 – SOUTH AMERICA — Climate change means more extreme weather and baby penguins are paying the price with their lives, said a pair of long-term studies out Wednesday. Soaking rainstorms and unusual heat have killed vast numbers of young Magellanic penguins at the bottom tip of South America, said one of the papers published in the journal PLOS ONE. “It’s the first long-term study to show climate change having a major impact on chick survival and reproductive success,” said lead author Dee Boersma, a biology professor at the University of Washington. Over the course of 27 years, an average of 65 percent of chicks died annually, said the study. About 40 percent starved, while climate change was blamed for killing an average of seven percent of chicks per year. However, climate change killed 43 and 50 percent of all new chicks in two extreme weather years. The chicks were particularly susceptible when they were nine to 23 days old and too large to be protected by their parents but too young to have grown waterproof feathers. “We’re going to see years where almost no chicks survive if climate change makes storms bigger and more frequent during vulnerable times of the breeding season as climatologists predict,” said co-author Ginger Rebstock.

The study was carried out in Punta Tombo, Argentina, at the world’s largest breeding area for Magellanic penguins. The other study in PLOS ONE focused on Adelie penguins in Antarctica. These penguins were tracked over the course of 13 years to see how the breaking off of giant icebergs impacted their survival. In 2001, two massive icebergs encroached on the penguins’ foraging grounds in the Ross Sea. The icebergs “dramatically” cut back on the penguins’ access to prey, but many were still able to raise a chick, said lead researcher Amelie Lescroel from the French National Center for Scientific Research. However, she added, if extreme events like this happen more often, “it will become very hard to predict how penguin populations will buffer future sea ice changes.” -AFP 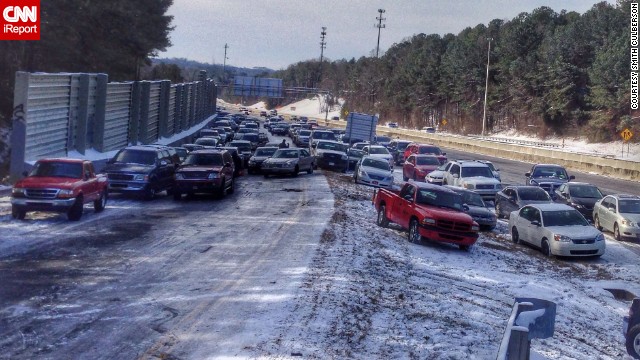 January 30, 2014 – ATLANTA, Ga. — It was just a few inches of snow, but for the normally balmy South, enough of it fell to throw life into turmoil for millions of people from Louisiana to Virginia on Wednesday, trapping Atlanta motorists overnight on highways and forcing hundreds of children to camp overnight at school. Some of the worst disruptions were in Georgia, where schoolchildren were marooned on buses or stayed overnight in classrooms or gyms. Some workers in downtown Atlanta slept in their offices, and many traffic-trapped motorists simply trudged home in the cold. More than 1,000 accidents were reported. State troopers rescued stranded motorists, and National Guard troops made food deliveries. Social media erupted with parents incensed that they were forced to drive through the storm to retrieve their children. Emergency crews were still rescuing some motorists Wednesday morning. Atlanta and Birmingham, Ala., were virtually shut down. Workers who hoped to rush home at midday Tuesday to beat the snow instead created traffic gridlock just as the storm was hitting. Parents frantically drove to schools and buses and struggled to get children safely home. Atlanta reported nearly 800 traffic accidents, and Georgia state police logged nearly 1,400 wrecks, with at least one person reported dead and at least 130 injured. Stranded motorists pleaded for help in cell phone calls. Governors in North Carolina, South Carolina, Alabama and Louisiana declared states of emergency. In Sandy Springs, Ga., just north of Atlanta, an expectant father and a local police officer helped a mother deliver a baby inside a car on Interstate 285 around 5 p.m. Tuesday after the couple was unable to make it to a hospital through clogged traffic. The Atlanta Journal-Constitution reported that the mother and baby Grace were doing fine after paramedics took the family to the hospital.

Georgia Gov. Nathan Deal said state National Guard troops had been sent to highways to try to move stranded school buses. Georgia state troopers were dispatched to schools to help retrieve students who had spent the night, he said. A Guard spokesman said troops handed out military Meals Ready To Eat, or MREs, to motorists and provided water to a stranded family to make formula for a baby. By mid-morning, Atlanta school officials said all schoolchildren were “in a safe place,” either under care at schools or at refuges as fire stations to await transport home. But that barely cooled tempers on social media, where parents blasted school officials for not canceling classes as soon as forecasters predicted the storm. “I want heads [to roll] tomorrow,” one parent posted on the Facebook site for the DeKalb County School District in Georgia. He complained that his wife still had not returned home by midnight after fighting her way through snow and traffic to try to retrieve the couple’s child from school. “I shudder to think of the lawsuits if any students, faculty or parents are seriously hurt or even killed because you were so foolish as to ignore weather reports and not cancel school,” another parent wrote on the site. On Instagram, a Georgia parent wrote, “My baby [was] stuck at school, because Marietta High School was crazy and did not let school out early!” Atlanta city officials had assured the public that they had learned the harsh lessons of a 2011 ice storm that paralyzed the city. “Atlanta, we are ready for the snow,” Mayor Kasim Reed posted on his Twitter account Tuesday. But by Wednesday morning, Reed’s Twitter messages sought to reassure angry residents that the city was working hard to plow roads and get everyone home safely: “We know you want to get home, and we are going to work all day until you can return safely.” Reed said “a lot of people” were still stranded on highways Wednesday morning, but he was not certain how many. City bus service was shut down, and people waited in vain on icy train platforms for trains that were late or never arrived. –LA Times