Note: Before commenting on any posts please make sure you either watch or read each post in it’s entirety. Before, making a comment, if you don’t have the time to watch or read fully please restrain from commenting. When you do this it will help to reduce confusion.

April 28, 2013 – NEW ENGLAND – Atlantic sea-surface temperatures off the U.S. Northeast coast during the second half of 2012 were the highest recorded in 150 years, according to a report released on April 25 by NOAA’s Northeast Fisheries Science Center. A deviation in average temperature by more than a degree is uncommon; this increase, from the average of 54.3 degrees F. over past 30 years to 57.2 degrees F. in the second half of last year is the highest jump measured. It is also an amount of warming not seen in any other ocean. Warming ocean temperatures off the Northeast have meant changing distributions of some fish populations; black sea bass and summer flounder are among the species shifting northeastward. One NOAA scientist said while it’s not yet clear what these findings will mean for the Northeast Shelf ecosystem and its marine life, that ecosystem is changing. –Sports Fishing Mag

The Big Chill: Saskatchewan has coolest spring in 100 years, It’s been a record-cold spring so far in many Saskatchewan communities. On April 11, Regina’s Wascana Park was still snowbound. (CBC)

April 28, 2013 – CANADA – What may have been Saskatchewan’s snowiest winter ever is being followed now by the coldest spring in more than a century. On Monday morning, cold weather records for the day were broken in at least 12 communities, according to Environment Canada. Among the colder communities was Weyburn, where it dipped to –13.6 C, shattering the old record for April 22 of –7.2. Regina dipped below -10 Monday morning and crept up to 0 C later in the day. That compares with a high of about 21 a year earlier. The temperature dropped to – 15 C overnight. For Tuesday, Environment Canada forecast a high of 3 C in Regina, compared with a normal of 15 C. It’s been the coldest March and April in 113 years, according to Environment Canada’s senior climatologist David Phillips. “You have to go back to the early 1900s to find a temperature that was as cold on this morning in both Regina and Saskatoon and I’m sure in many other parts of the province,” he said. A lack of warm air coming up from the U.S. this spring is part of the trouble, Phillips said. Another problem is the extensive snow cover, which is reflecting a lot more sunlight than usual. That’s been keeping the ground from warming up. Ten days from now, he says, Saskatchewan may start to see the temperatures inch up toward more seasonal values. In fact, May and June should be warmer than normal, Phillips said. -CBC

Posted on April 27, 2013 by The Extinction Protocol 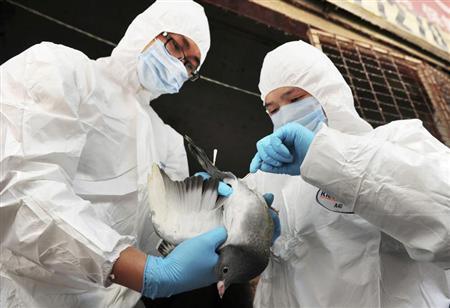 Looking for the culprit: Health officers examine a pigeon for H7N9 at a poultry market in Changsha, Hunan province April 7, 2013. Credit: Reuters/China Daily

April 27, 2013 – CHINA – China on Saturday reported its first case of H7N9 bird flu in the southern province of Hunan, the latest sign the virus that has killed 23 people in the country is continuing to spread. The official Xinhua news agency said the patient was a 64-year-old woman from Shaoyang city who developed a fever on April 14, four days after having contact with poultry. Her condition had improved with treatment, it added. The flu was first detected in March. This week, the World Health Organization called the virus “one of the most lethal,” and said it is more easily transmitted than an earlier strain that has killed hundreds around the world since 2003.None of the 41 people who had come into contact with the newly-confirmed Hunan patient, identified only by the surname Guan, had shown symptoms, Xinhua said. A 54-year-old man who fell ill in Jiangxi province was also being treated in Hunan, where he was diagnosed with H7N9, Xinhua said. The Hunan cases come a day after the eastern province of Fujian reported its first case and during the same week that a man in Taiwan become the first case of the flu outside mainland China. He caught the flu while travelling in China. Chinese scientists confirmed on Thursday that chickens had transmitted the flu to humans. –Reuters 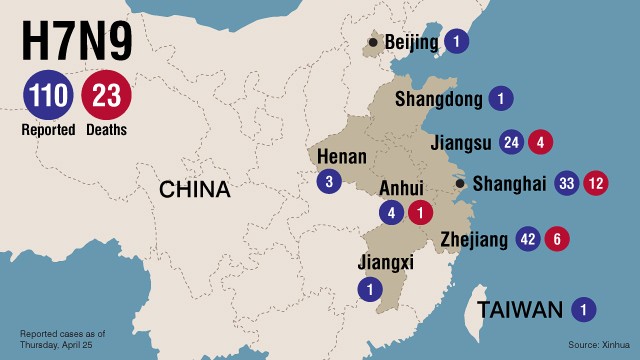 Flu mutating 8 times faster than any flu virus known: The new bird flu could be mutating up to eight times faster than an average flu virus around a protein that binds it to humans, a team of research scientists in Shenzhen says. Dr .He Jiankui, an associate professor at South University of Science and Technology of China, said yesterday that the authorities should be alarmed by the results of their research and step up monitoring and control efforts to prevent a possible pandemic. With genetic code of the virus obtained from mainland authorities, the team scrutinized haemagglutinin, a protein that plays a crucial rule in the process of infection. The protein binds the virus to an animal cell, such as respiratory cells in humans, and bores a hole in the cell’s membrane to allow entry by the virus. The researchers found dramatic mutation of haemagglutinin in one of the four flu strains released for study by the central government. Nine of the protein’s 560 amino acids had changed. In a typical flu virus, only one or two amino acids could change in such a short period of time, He said. “It happened in just one or two weeks. The speed may not have caught up with the HIV, but it’s quite unusual for a flu.” The fast mutation makes the virus’ evolutionary development very hard to predict. “We don’t know whether it will evolve into something harmless or dangerous,” He said. “Our samples are too limited. But the authorities should definitely be alarmed and get prepared for the worst-case scenario.” The origin of the virus was puzzling due to its novelty, but his research suggested some clues that differ from the mainland authorities’ theories. His team compared the new virus strain to all other H7N9 viruses identified in Europe and in other Asian countries that were cited by the Ministry of Agriculture as possible origins of the new bird flu, but found them all very different. In fact, the new bird flu was quite similar to some familiar domestic viruses such as H9N2, H11N9 and H7N3 found in Zhejiang and Jiangsu. He said researchers could not rule out the possibility that the new virus was carried into China by wild birds, but it was more likely to be of local origin. –South China Morning Post

Note: Before commenting on any posts please make sure you either watch or read each post in it’s entirety. Before, making a comment, if you don’t have the time to watch or read fully please restrain from commenting. When you do this it will help to reduce confusion.

2013: the year of the comet – new comet discovery announced

April 28, 2013 – SPACE – Comet TENAGRA: Cbet nr. 3478, issued on 2013, April 19, announces the discovery of a apparently asteroidal object (discovery magnitude ~19.6) by M. Schwartz and P. R. Holvorcem on CCD images obtained with the Tenagra II 0.41-m f/3.75 astrograph located near Nogales, AZ, U.S.A. After posting on the Minor Planet Center’s NEOCP webpage, this apparently asteroidal object has been found to show cometary features by our team. Stacking of 12 R-filtered exposures, 50-sec each, obtained remotely from Haleakala-Faulkes Telescope North on 2013, April 18.4, through a 2.0-m f/10.0 Ritchey-Chretien + CCD (operated by LCOGT), shows that this object is a comet: compact coma about 5” in diameter elongated toward PA 110. The new comet has been designated COMET C/2013 G9 (TENAGRA). –Astro Watch