The Unleashed Demonic Hordes of the Abyss 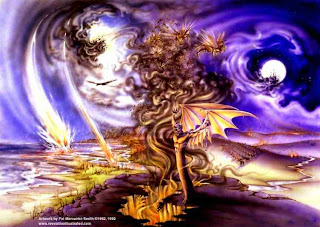 The First Woe of the seven year tribulation period has to do with the demonic legions which are presently held prisoner in the bottomless pit called “the Abyss”. The demonic world is quite aware of this prison hold and when Jesus walked on this earth in His humanity the demonic legions feared greatly and begged Jesus NOT to send them to this prison hold before this day which will be at hand quite shortly (Matt. 8:16, 28-32, Mark. 1:23-27, 5:1-14, James 2:19). The demonic hosts - who presently are detained in this bottomless abyiss - were placed there by Almighty God for their gross transgressions and heavenly rebellion against Almighty God and His ETERNAL sovereignty. They were placed there after the Noaic flood for their excessive part in leading men to global rebellion against their Creator and His natural laws (Gen. 6, Isa. 14:12-17, Ezek. 28:12-19, 2 Peter 2:4, Jude 1:6).

These godless beings in their psychotic rage and violence will seek to – once again - tyrannically dominate and plague man, preparing all of humanity for the Third Woe which is to come.

These insane supernatural beings - which transcend the realms of time and space - are exponentially more powerful and intelligent than man. These godless beings in their psychotic rage and violence will seek to – once again - tyrannically dominate and plague man, preparing all of humanity for the Third Woe which is to come. These demonic legions fully comprehend the hour in which they now occupy and know that their time is dreadfully short. These released demonic hordes from the abyss prison hold – as insane and delusional as they are – know quite well of the impending judgment and doom that awaits them in the Lake of Fire FOREVER and EVER! It is their sole intention to discredit Almighty God's Word and promises and to torment and take as many humans with them to their ETERNAL abode as possible (Matt. 8:29, 25: 41, Mark 1:24, 5:7, Luke 4:34). 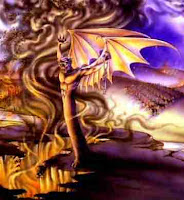 These demonic legions are described to us as locust. Locusts are a consuming and devouring terror to all plant life that stands before them. So devastating are locust that they can wipe out vast plush green areas of vegetation in a matter of hours. These demonic hordes are told not to devour grass, but to torment men who have NOT the seal of Almighty God (Rev. 9:4). As these demonic hosts are released from their darkened prison in the abyss they will ravish and torment the unsaved defiant inhabitants of the earth for a period of five months (Rev. 9:5). These demonic hordes are lead by a demonic general named Abaddon, whose name means destroyer! What more do you need to know about this army and very hour!


These demonic hordes are lead by a demonic general named Abaddon, whose name means destroyer!

These tortured inhabitants of planet earth - who are also part of Lucifer’s satanic rebellion against Almighty God - are now being violently oppressed by Satan’s legions of fallen angels and are now driven as cattle by Satan to serve his destructive diabolical plan in his final war of this age against Almighty God (Rev. 16:13-16). Since these individuals out right reject the Divine revelation revealed to them by Almighty God, His Two Witnesses and His ministering angels, they have now opened themselves to the demonic influences and possession of their minds (2 Cor. 4:3-4, 2 Thess. 2:9-12).

Remember, by this time – the seven Seal Judgments and the first four Trumpet Judgments have passed ( Rev. 6-8 ). Multitudes of millions ( i.e.,1.5 billion ) of the earth’s inhabitants have been slain by global war, pestilence and famine, not to mention the global environmental devastation that has ravished 1/3rd of the earth's natural resources, elements, sea creatures, shipping commerce, celestial lights. It is now - after all of this global devastation - that millions of enraged demonic hordes are released from their prison hold of the abyss and will now commence terrorizing and torturing countless millions of the surviving masses of unsaved mankind for five months.
.

Could things get any more horrific than this? Oh… Yes! EXPONENTIALLY WORSE!!


At this time, one might ask himself, “Could things get any more horrific than this?” For in this brief time period since the Covenant of Peace was confirmed - which was suppose to usher in world peace and a new global age for all mankind (Dan. 9:27, 1 Thess. 5:3, Rev. 6:2) - the whole world has been ravished beyond compare and humanity laid waste on a scale unparalleled. Vexed and tormented beyond belief by man’s transgressions and demonic oppression, could things get any more worse than this? Oh… Yes! EXPONENTIALLY WORSE!! (Rev. 9-16)


The Kingdom of Heaven is at hand!


Email
« back
Return to Website  > Index  > General  > Bible Prophecy Forum Postings  > The Unleashed Demonic Hordes of the A...