The comet and the great drought of 2011-2012: Rain disappears from skies from China to South America January 8, 2012 – BEIJING – China’s largest freshwater lake has shrunk to its smallest size in years due to drought, state media and officials said Thursday, endangering the ecology in the area and fishermen’s livelihoods. After a dry spell of more than a decade, Poyang Lake in east China’s Jiangxi province is drying up fast as scant rainfall has sent water levels in the Gan River — which feeds the lake — to record lows, the Xinhua news agency said. The lake’s area was 183 square kilometers (73 square miles) Thursday, an official at the local hydrological bureau told AFP — nearly half the average of 344 square kilometers recorded each year on this day since 1951. “This year’s level is very low,” the official said, asking not to be named, adding there had been 65 percent less rainfall in the area since December compared to the average recorded at the same period over the past 60 years. As large as 4,500 square kilometers when at full capacity — more than six times the size of Singapore — the lake is home to the migrating Siberian crane in winter and to a rare finless porpoise all year round. The long drought has left many of the lake’s 10,000 fishing boats stranded in shallow waters. China is regularly affected by crippling dry spells. Last spring, authorities said a drought along the Yangtze River had affected more than 34 million people, leaving livestock without water and parching a major grain belt. In December, Outlook — an official Xinhua news agency weekly — quoted the Yangtze Water Resources Commission as predicting an ongoing drought in the lake area and warning of a threat to the local ecology and economic development. –Terra Daily 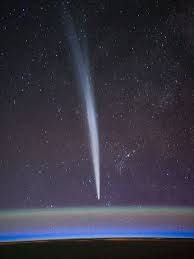 Comet Lovejoy the December 2011 omen? “A comet will be seen in heaven – a star, that is, with a tail or appendage—and this apparition will signify destructions and tumults and hard strifes, and withholding of rains, and dryness of the Earth, and mighty battles, and the flowing of blood upon the Earth of the east, and from beyond the River Harbor it will reach to the very end of the west. And the just and the truly righteous will be oppressed and will suffer persecutions, and the house of prayer will be destroyed.” – Rigord of St. Denis 12th century – The Extinction Protocol, page 18 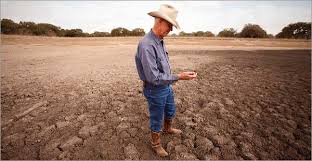 Texas worst drought on record: The National Weather Service has officially declared last year as the driest on record in Texas and the second hottest. Meteorologists predict the situation won’t improve much this year. That means water restrictions will continue, and we’ll lose millions of trees. Record-setting heat and little rain in 2011 has left North Texas in a severe drought. The water level at Lake Lavon is down 12 feet. “It is a challenging time, especially to bring awareness to our consumers and businesses how critical our drought has impacted our reservoirs,” said Denise Hickey, spokesperson for the North Texas Municipal Water District. “As we’re planning to move through this drought period, we’re also planning and initiating additional strategies to bring additional sources online.” The diminished water supply forced many counties to put residents under water restrictions indefinitely. The Texas Forest Service says the drought may have killed as much as 10 percent of the state’s trees. That’s 500 million trees. Some trees in your yard might look dead, but tree experts say don’t cut them down yet. They still might come back in the spring and you should continue watering them. “A lot of trees are dormant and a lot of trees go dormant early when there’s a drought situation. And they kind of do that for a defense mechanism,” said Matt Grubisich, urban forester for the Texas Trees Foundation. “Most municipalities still let you use a soaker hose, and that is a very adequate way to be able to still water your trees.” Forecasters expect the drought to last through at least June. “It’s going to get worse before it gets better,” said Grubisich. -MSNBC 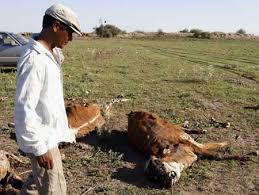 Argentia’s worst drought in almost a century: Dry weather that’s hurting soybean and corn crops in Argentina may cause more damage than the 2008-2009 drought that was the worst in 70 years, a farming group said today, disputing a government statement. The current spell of hot, dry weather covers more area and started earlier in the season than the previous drought, the Argentine Association of Regional Consortia for Agricultural Experimentation said in an e-mailed statement today. That contradicts Argentina’s National Institute for Farming Technology, which said it’s “optimistic” the weather situation will improve. While precipitation levels in December were “way below average,” the drought can “in no way be compared to what happened in 2008,” Carlos Casamiquela, the institute’s head, said in an e-mailed statement yesterday. Corn and soybean crops are suffering after weeks of low rainfall in Argentina and southern Brazil because of the La Nina weather pattern. Argentina’s soybean output plunged by almost a third to 32 million tons in the 2008-2009 season from 46.2 million tons a year earlier. -Bloomberg 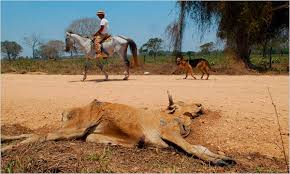 Mexico’s worst drought in 70 years: Mexico’s social development secretary says an estimated 600,000 households suffered property damage or crop losses due to an unusual combination of floods, drought and freezing weather in 2011. Heriberto Felix Guerra says the drought has been so bad that about 2.6 million people in about 1,650 villages and towns in northern Mexico do not even have drinking water. Felix Guerra’s agency has helped truck in water to those communities. He said that hundreds of other communities in the country’s southeast had suffered persistent flooding. He said in a statement Sunday that the extreme weather appeared to be caused by climate change, and predicted that such natural disasters will become worse in coming years. -Google AP
Wildfires, floods, droughts across Latin America: From Chile to Colombia to Mexico, Latin America has been battered recently by wildfires, floods and droughts. For many witnessing the extreme weather in the region and around the world, the question that comes up again and again is whether climate change is playing a role. The response from experts: Probably. While leading climate scientists are unable to pin any single flood or heat wave solely on climate change, experts say the number of extreme weather events is increasing worldwide and the evidence suggests global warming is having an impact. Wildfires are raging in Chile during an atypical heat wave, and northern Mexico is suffering from its worst drought in 70 years of record-keeping. A second straight season of heavy rains in Colombia killed at least 182 people, destroyed more than 1,200 homes and caused an estimated $2 billion in damage in the past four months. Researchers predict more wild, unusual weather in the coming years, and they say Latin America is especially vulnerable because deforestation and sprawling construction have made the region more susceptible to flooding and landslides. At a rose farm in the Colombian town of Chia, workers say floodwaters covered fields of roses last month for the second time in less than a year, leaving damaged greenhouses and a wasteland of shriveled flowers. “Never in the history of this farm – and it’s a business with 30 years in the market – have we ever had any such problem,” said Javier Castellanos, the farm’s manager, who estimates the damage at more than $6 million after floods in April and December. –Huffington Post 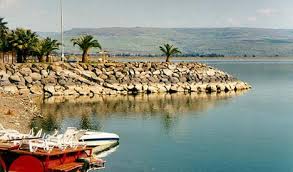 year: Israel is being hit with another official drought for the eighth year in a row, according to the country’s Water Authority. Figures released Monday by the government’s executive branch in charge of Israel’s water economy classified this year as “arid.”At present, Israel’s water supply stands at roughly 2 billion cubic meters. The winter season, which normally should be filled with rain, has measured up to only 72 percent of the multi-year average rainfall thus far, state-run Voice of Israel radio reported. At the beginning of December 2011, it appeared as though early winter rains might have saved the situation, slightly reducing the drop in the water level in Lake Kinneret (Sea of Galilee). But last year’s season, even with one month of relatively heavy rains, was still fairly dry and did not escape the official drought that has wracked the entire Middle East for a decade. Nevertheless, if January through March 2012 are filled with rain, Israel might yet luck out, and break the cycle. –Israel Nation

Email
« back
Return to Website  > Index  > General  > Bible Prophecy Forum Postings  > The comet and the great drought of 20...