Changing the Set Times and Laws

posted by Cindy by the Sea 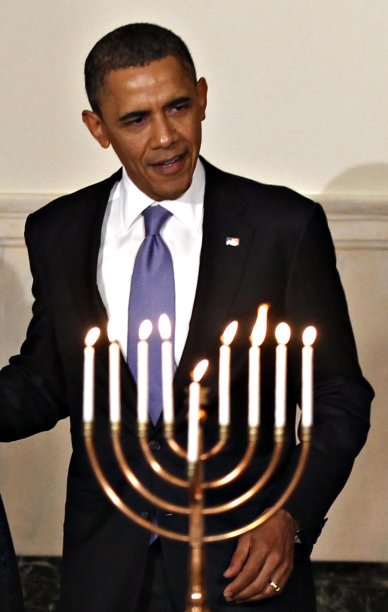 I have been wondering, as many of you have, if there is any significance to the early celebration of Hanukkah at the White House on December 8, when, Hanukkah as we all know, does not officially begin until the evening of December 20. The official story is that it was held early as the President and his family will be traveling to Hawaii for their Christmas vacation on December 17, so, whether it was deliberate or merely for convenience sake, it really doesn’t matter, the fact, is, the President chose to change it regardless of the reason.

There have been a number of comments about the party held at the White House, some commenting on the fact, that all eight candles were lit, instead, of lighting one candle daily over the course of eight days, as is customary, until all eight have been lit. I thought that a little unusual, but, not all-together surprising given the fact, the event was hosted by someone with little regard for the actual meaning of the holiday.

After giving it some thought and for curiosity sake, I decided to see how many days there were between December 8 and the first day of Passover, 2012, which, is April 6 of this coming year and, using a date to date calculator, I found out there are exactly 120 days! Wow, 120 days! Now that got my attention!

We’ve all become familiar with the meaning of numbers in scripture and the number 120 is a particularly interesting one; according to Bullinger, it is made up of three forties, 3 x 40 =120, which, when applied to time signifies a divinely appointed period of probation, a divinely appointed number during a period of waiting.

The question, we might ask ourselves, then, is why, there appears to be a 120 day probationary period between December 8, 2011 and April 6, 2012; what purpose would this serve and and to whom, would it apply?

To answer that question, we need to look at the Feast of Dedication itself. Hanukkah, as most of us know, recognizes the historical event of the victory of the Maccabees over the Syrian King Antiochus Epiphanes, who, in 167 B.C erected an image of Zeus in the temple of God and sacrificed a pig on the altar. In cleansing and re-dedicating the temple, oil was needed to burn for 8 days, but, only a small amount of oil could be found; oil enough for one day only, but, miraculously, this small amount of oil burned for full 8 days - just long enough for new oil to be consecrated. Thus, the miracle of Hanukkah!

There is much symbolism to be gleaned from this event and it’s interesting, that only now, has the Feast of Dedication been looked upon as a strong contender for the rapture. Which, is kind of surprising, considering Jesus himself observed it (John 10:22) and spoke of it in reference to his second coming. In fact, Matthew 24: 15-22, seem to be an almost exact mirror of the previous events.

15When ye therefore shall see the abomination of desolation, spoken of by Daniel the prophet, stand in the holy place, (whoso readeth, let him understand:)

16Then let them which be in Judaea flee into the mountains:

17Let him which is on the housetop not come down to take any thing out of his house:

18Neither let him which is in the field return back to take his clothes.

20But pray ye that your flight be not in the winter, neither on the sabbath day:

21For then shall be great tribulation, such as was not since the beginning of the world to this time, no, nor ever shall be.

Amazing! When you think about it, it sounds as if Jesus is warning them (the Jewish people) that events preceding his second coming would be much like events that they were already very familiar with.

Therefore, we can surmise that the divinely appointed period of waiting (120 days) has everything to do with the Jewish people and not the Church. After all, it was not Gentiles that the party at the White House was held, but, Jewish constituents, for whom, the President likes to throw a bone every now and then. In other words, it was his change in date, that created the 120 days between Dec. 8 and Passover, therefore, the probationary or divinely appointed waiting period, has to do expressly with them and not with us.

Many of you are familiar with the work of Ron Reese, whose contention it is, that we are already in the midst of the week, which, he believes began in 2008. I like the work that he has done and find his work to be quite compelling. There are many things that can be argued, but, numbers are not one of them, for, like it or not, numbers are what they are. So, is he right? Are we indeed, in the midst of the week? Only time will tell.

Supposing he is right, the witnesses and the 144,000 would have to appear very soon to work within his 2008 – 2015 time frame. According to scripture, the witnesses will minister for 1260 days, so, based on this, I did a little date calculating to see if there was a possible fit, and, I found out, there is exactly 1260 days between the evening of April 1, 2012 (which, is Palm Sunday) and Rosh HaShannah, September 13, 2015. Which, if you subscribe to Ron’s theory makes sense, as the witnesses would have to appear before the revealing of the Anti-Christ, which, he says, will take place on April 11, 2012.

Dates and numbers aside, we know from Daniel 7:25, one of the things the Anti-Christ will do is change the set times and laws. So, what are the set times and laws? I believe, it is a reference to God’s appointed Feasts (Leviticus 23, including, Hanukkah and Purim) and, the law as given in the Torah. Therefore, observing Hanukkah on any other date than it’s actual date could perhaps fall in to this category, or may at least, serve as a foreshadowing for what lies ahead.

And, pressuring the world to accept practices, such as homosexuality, which are expressly forbidden in the Torah, could also represent an attempt to change the law; God’s law. Never forget, this is the President, who won the election on the promise of change – “change you can believe in”.

So, where does that leave us, the Church, if the next 120 days have to do specfically with Israel?

And, my answer would be – very close to the rapture! Oil has everything to do with the Holy Spirit and just as the light of the Menorah in the temple was never to be extinguished, but, to burn day and night, the oil that burns in us, also, will never be extingushed. For it says in 2 Thessalonians 2:7 -

“For the mystery of lawlessness is at work and will continue to do so, until he who restrains is taken out of the way”.

Brothers and sisters, it is the Holy Spirit present in each one of us that holds back this day. The closer we get, the less of a mystery it becomes, and, suddenly, once, we are gone, a mystery it will no longer be. Therefore, the closer we get to the day, the clearer we see, the clearer we see, the closer, we are to going home!

*Please keep in mind, all observations and opinions expressed here at Cindy By The Sea are for the purpose of study and discussion only and never constitute a”thus saith the Lord” unless quoting scripture.

“Pray for the peace of Jerusalem, they shall prosper who love thee!” Psalm 122:6

Watching and waiting with YOU for the soon return of Jesus! Cindy


A thought just occurred to me re this present Syria, Israel, Obama thing.
There are 8 days of Hanukkah beginning on Dec 20 this year.
Obama lights a Hanukkah, the middle candle is not in its holder but placed below.
Is this a signal that he thinks he is so cleverly giving?
Christmas eve?