President Obama and the Eye of Horus 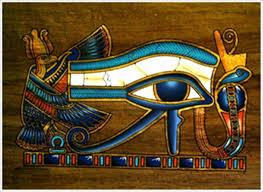 The Eye of Horus

In the early morning hours of October 16, I awoke from a very vivid dream regarding President Obama. I’ve been thinking and praying about it all week, wanting to post on it, but, not sure what God was showing me. Finally, with the events that occurred in Libya this past week, I think I understand.

Let me explain by first relating this short but, very vivid dream.

In the dream, I, (along with one other person) was making up a bed that President Obama had previously been sleeping in. We were straightening the covers and putting the pillows in place, when, I heard these words: “He has received the eye of Horus ring”.

That was it, very brief, but, very clear and I awoke the next morning wondering it meant and what an eye of Horus ring might be.

Horus according to Egyptian mythology is the off-spring of the god Osiris and the goddess Isis. The eye of Horus, the ancient Egyptian symbol of protection, royal power and good health.

About the Egyptian Eye of Horus -
Also known as the UDJAT (meaning eye), it was the eye of the falcon-god Horus,
son of the goddess. The Egyptian pharoah was thought to be the god Horus
incarnate. A symbol of perfection and well-being, it was a powerful amulet worn
for protection against evil in ancient Egypt.

Without getting in to the many details of Egyptian mythology, it is also believed, that Horus will fight a battle of good and evil to avenge the death of his father Osiris, which, will culminate in his (Osiris) return to rule the world.
In the meantime, Harpocrates has grown to manhood, and he is called Horus. Osiris has been resurrected as the king of the dead in the underworld. One day, Osiris appears to Horus in the land of the living. He convinces Horus to avenge the wrongs that have been committed by Seth. So, Horus tracks down Seth and a huge battle begins. Victory is elusive and the battle turns first to one side, then to the other.

It is said that this battle of good verses evil still rages, but some day, Horus will be victorious and on that day, Osiris will return to rule the world. http://www.egyptartsite.com/osi.html

This week, we awoke to the news that the hated Libyan dictator Muammar Qadhafi had been killed, his 40 year reign as evil dictator at an end thanks to Nato funded revolutionary forces. A feat that one CIA officer described as “breath taking”.

“The contrast between [George W.] Bush’s handling of Iraq and Afghanistan and Obama’s handling of Libya is breathtaking,” said Bruce Riedel, a former CIA officer and a senior fellow at the Brookings Institution. “No ground footprint, no U.S. casualties and no responsibility for the day after.”

Wow! Pretty high praise for a President whose number are at an all time low. Causing me to wonder, just why, President Obama has taken a sudden interest in these last few months for ridding the world of Middle-East dictators.

From a recent article in the LA Times:

Targeted foreign military operations have become one of the president’s clearest legacies. Not that the Libya mission is likely to bring him many political rewards at home.

Again, if this is the case, why is President Obama so intent on re-shaping the middle-East, when, it will not bring him any particular favor at home with the 2012 elections approaching?

The eye of Horus ring and my dream, as I interpret it 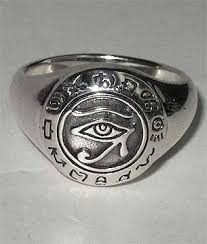 I believe the dream is two-fold.

1) – Getting up from sleep could indicate either a resurrection, (Osisris, perhaps, as sleep is often symbolic of death), or it could mean that someone has risen to the occasion. In other words action is indicated, the type of action that involves “no turning back” as indicated by the bed being neatly made up.

2) Receiving a ring. Indicative of entering a covenant. Symbolism that goes back to ancient times and exists today in the exchanging of rings in the covenant of marriage.

In Genesis 41, when Joseph is made second to Pharoah, he is given a ring.

“So Pharaoh said to Joseph, ‘I hearby put you in charge of the whole land of Egypt.’ Then Pharoah took the signet ring from his finger and placed it on Joseph’s finger.”

Has President Obama received such a ring recently, (not physically, but, in the spiritual realm), or, is this what transpired in the secretive re-taking of the Presidential oath, when President Obama entered office?

There has been a lot of speculation as to whether President Obama is the anti-Christ or not. I can’t answer that question, but, what I can say is this:

President Obama is clearly at work re-structuring the middle-East. His presidency is not (nor has ever been) about the American people. Whether, he has another four years or not, only God knows – a fact, that may not matter much, as he is speedily working to accomplish the purpose for which, he has been placed into position.

Perhaps, Horus is to Osiris what John the Baptist was to Jesus. One who prepares the way.

Contrary to what many think, it is not the seeds of democracy being sown in the middle-East but, rather hard-line Islam and Sharia law in the form of an Islamic caliphate. This will result in the Psalm 83 war, but, don’t despair, God will prevail and Israel will once again triumph over her enemies.

The stage is set, President Obama has accepted his role in end time events and it will not be reversed. There is much more to come; the Psalm 83 war is very close and once it happens, the other events will fall in to place in quick succession.

Hang in there, brothers and sisters! Don’t give up hope, in spite of what mockers say, the rapture is coming very soon! Jesus has given us the signs to watch for and we know by the signs we are witnessing that his return is nearer than ever before!

Pray for the peace of Jerusalem, they shall prosper who love thee! Psalm 122:6

Watching and waiting with YOU for the soon return of Jesus! Cindy


Email
j
Jennice
Re: President Obama and the Eye of Horus

I sense an affirmation in my spirit about the validity of this dream. I have sensed much the same thing, as to Pres. Obama's "function"...just didn't have an "official" spiritual name for it...I think this fits!