This Article Was Posted at the POEM Blog for Easy Sharing:
http://pillarofenoch.blogspot.com/2011/09/ominous-sign-in-heaven-on-yom-teruah.html

By Helena Lehman of the
Pillar of Enoch Ministry
http://pillar-of-enoch.com


On the first day of Yom Teruah or the Feast of Trumpets on September 29th, 2011, an unusual sign was seen in heaven that seemed to mimic the sign described in Revelation 12:1 of “a woman clothed with the sun, with the moon under her feet, and on her head a garland of twelve stars.”

This sign is known to have appeared on the Yom Teruah that fell on September 11th, 3 BC, which many hold to be the sign that heralded the imminent birth of Yahshua the Messiah. This sign fell in the Zodiac sign of Virgo the Virgin, which can refer to Miriam, the mother of Yahshua the Son of Man, though it also has a darker connotation as Eve, the first woman to sin.

On 9-11-3 BC, under Virgo’s feet, was the Crescent Moon heralding the beginning of another Jewish Civil year and the seventh Jewish month of Tishri. Meanwhile, the Sun was clothing Virgo in her belly, symbolizing the imminent birth of “the Sun of Righteousness” (Malachi 4:2). Also, on 9-11-3 BC, the Woman’s crown of twelve stars could also clearly be seen in Leo the Lion, the symbol also known as the Lion of Judah that has eleven principle stars. On that day, however, the twelfth star was present in the Messiah planet Jupiter, which was in conjunction with the “king” star Regulus in Leo’s forepaws.

In contrast, on 9-29-2011, a comet, which has always been seen as a harbinger of evil, was just above Virgo’s head and near to the hind end of Leo the Lion. This is the Comet named Elenin. Ominously, the name Elenin can be broken down into the Sumerian terms “El” meaning “God” and “Nin” meaning “Lady”. Taken together, then, they mean “lady god”, a term which could easily be applied to any number of ancient Sumerian goddesses, including Nin-Gal, meaning “Great Lady” or “QUEEN”.


STAR CHART FOR THE FEAST OF TRUMPETS
ON SEPTEMBER 29TH, 2011 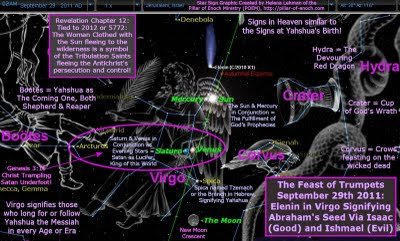 As such, this comet may be there to identify Virgo not with Yahshua’s saintly Jewish mother Miriam, but with the false Gentile “Queen of Heaven” worshipped by many around the world in place of Christ. This false goddess is also known by the blasphemous term “Mother of God” and the “Co-Redemtrix” supplanting Christ as the Redeemer!

In addition, instead of the Sun in Virgo’s belly, the Sun was at Virgo’s chest in conjunction with Mercury on 9-29-2011, while the planets or “wandering stars” Saturn and Venus were in conjunction in her belly. At first glance, the “Morning Star” planet Venus (named “Shining” or “Nogah” in Hebrew) that was being paired with Saturn (named “Sabbath” or “Shabbatai” in Hebrew), which represents Christ’s crown and His rest, could suggest that the child about to be born in Virgo’s the Virgin’s womb at this current time in history might be a representative of Yahshua the King of kings as the Morning Star spoken of in Revelation 22:16.

However, as of 9-29-2011, both of Venus and Saturn appear in the night sky just after the Sun sets, meaning that they are NOT morning stars but evening stars! Unfortunately, this gives them a negative connotation to their original meaning. Furthermore, the current ruler of this world and the one who has destroyed our rest is the Devil, and his occult symbol has long been seen as the planet Saturn by way of his usurpation!

Fascinatingly, the Hebrew name “Nogah” or “Shining One” is the same name the Jews used for Venus, which also became known as the “Morning Star” or “Day Star.” This term is translated as “Lucifer” in Latin, and the name Lucifer has long been known as another title for Satan. This meaning of the word Nogah is applied to the King of Babylon in Isaiah 14:12, where he is depicted as the son of Satan for his blasphemy:


“How you are fallen from heaven, O Lucifer, son of the morning! How you are cut down to the ground, You who weakened the nations! For you have said in your heart: ‘ I will ascend into heaven, I will exalt my throne above the stars of God; I will also sit on the mount of the congregation on the farthest sides of the north; I will ascend above the heights of the clouds, I will be like the Most High.’ Yet you shall be brought down to Sheol, to the lowest depths of the Pit.” - Isaiah 14:12-15

This suggests that the sign that seems to mimic the one seen around the time of Christ’s birth in Virgo (which also represents the first woman to fall to Lucifer’s temptations named Eve) is NOT representative of the Virgin Miriam giving birth to the Son of God (or His Bride as some have asserted), but signifies a demoness giving birth to the rulers of the kingdom of Lucifer, which could only mean that the kingdom of the Antichrist is about to be born!

Based on all this reasoning, my conclusion about the sign in heaven that appeared on Yom Teruah in 2011 is that, though it IS a trumpet call from God, it is NOT heralding the Rapture! Instead it is heralding the increased persecution of the saints around the world in the coming year of 2012, just as the following passage in Revelation, Chapter 12 intimates will happen:


“And war broke out in heaven: Michael and his angels fought with the dragon; and the dragon and his angels fought, but they did not prevail, nor was a place found for them in heaven any longer. So the great dragon was cast out, that serpent of old, called the Devil and Satan, who deceives the whole world; he was cast to the earth, and his angels were cast out with him. Then I heard a loud voice saying in heaven, ‘Now salvation, and strength, and the kingdom of our God, and the power of His Christ have come, for the accuser of our brethren, who accused them before our God day and night, has been cast down.’ And they overcame him by the blood of the Lamb and by the word of their testimony, and they did not love their lives to the death. Therefore rejoice, O heavens, and you who dwell in them! WOE TO THE INHABITANTS OF THE EARTH AND THE SEA! FOR THE DEVIL HAS COME DOWN TO YOU, HAVING GREAT WRATH, BECAUSE HE KNOWS THAT HE HAS A SHORT TIME.” - Revelation 12:8-12

This passage describes the fact that Yahshua’s blood sacrifice on the Cross broke Satan’s stranglehold on mankind and those who claim Christ’s blood sacrifice as a righteous covering can overcome the Devil and his evil schemes against them. After Yahshua rose from the dead, He presented Himself before Yahweh God our Father as the Firstfruits of the First Resurrection and symbolically cast Satan down out of Heaven to Earth, where he is determined to destroy as many as he can who are not covered by Yahshua’s blood and therefore cannot overcome Satan’s power. This also suggests that Satan’s wrath against the True Church is also about to be unleashed.

However, there is a trump card in this scenario because Yahshua promised all who love Him deliverance from Satan’s diabolical aims. Many saints believe this will be done via an event known as the Rapture, for which there is much scriptural support. So, though this sign in heaven on Yom Teruah in 2011 does NOT indicate that the Rapture will occur on Yom Teruah this year, it does suggest that the Rapture is imminent, though it will likely come at a time when no one expects it to!

So keep looking UP, and keep praying that you will be spared Satan’s wrath upon the Tribulation Saints that will come out of the apostate Church and God’s commensurate wrath against the nations in league with Satan.


God bless you all, and Maranatha!