This article has been published at my POEM Blog for easy sharing:
http://pillarofenoch.blogspot.com/2011/07/prepare-your-hearts-for-rapture-for-it.html

Prepare Your Hearts For The Rapture,
For It Could Be Any Day Now!

By Helena Lehman of the
Pillar of Enoch Ministry

Many people have been writing to me to ask if the Oriental Lilies in my garden have bloomed yet, so I wanted to write a report to let everyone know that these flowers have NOT bloomed yet, but they are close! See the photograph below that was taken in July 16th showing the large buds on the lily stalks. When these open, they will bloom into big, trumpet-shaped pink flowers as per the photo of them taken last year, also shown below. Therefore, I am still VERY hopeful that my Oriental Lilies won't bloom before the Rapture THIS YEAR as per the Word of KNOWLEDGE that I received on Palm Sunday in 2010. 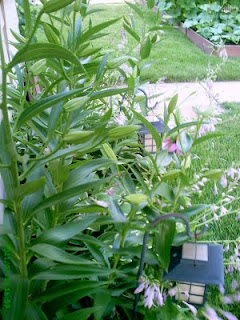 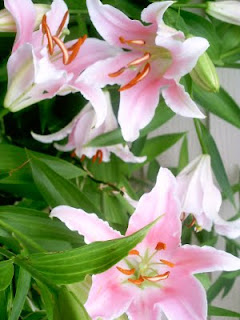 Though I wasn't given the year, Yahshua's Spirit told me that we would be raptured before my summer flowers bloomed last year on Palm Sunday. This word was given to me just as I was cleaning out my Oriental Lily flower bed of dead growth to make room for new growth, and these are the only true summer flowers in my garden. All the other flowers there begin to bloom BEFORE the Summer Solstice! This year, due to the long, cold, and extremely wet spring that we had this year in the Chicago area, my lilies have been delayed in blooming by one whole month! But they are very close to blooming right now so the Rapture may be very, very soon!

Last year, my Oriental Lilies bloomed on Tu B'Av, or the 15th of Av on July 26th, 2010 - at the same exact time that there was a Grand Cross in the heavens formed by four planets lined up in four opposing Zodiac Signs. This day is a special minor holiday on the Jewish Calendar that is similar to the American celebration of Valentine's Day. As such, it is a popular day in Israel for weddings to be performed, engagements to be announced, betrothals to be arranged, and gifts of candy, flowers and other gifts to be given.

In addition, an impending division of Israel is now being planned to create a Palestinian State that will include a large section of Jerusalem. This is to be settled by this autumn between the UN, UK/EU, USA and Russia without Israel’s direct input. I therefore feel STRONGLY that the Rapture will be this year before these talks are concluded! Besides all the natural disasters that are heralding the coming of Yahshua in the Rapture to retrieve His beloved Bride, the political hatred toward Israel is escalating now that the USA has turned its back on Israel. We also can see that the world is very close to complete religious apostasy in the form of creating a One World Religion that will eventually allow the fallen angels to assume their Pre-Flood roles as gods. The recent push by the Dalai Lama here in the Chicago area in support of the Interfaith and Ecumenical Movements is also a sure sign that the end is very near!

Besides all this, many believers are having dreams and visions confirming that the Rapture will be this year. Finally, the Signs in the Heavens are loudly proclaiming that, if not on December 21st, 2010 when there was a Blood Moon over the sword of the Messianic sign of Orion, the Tribulation may have officially began with the Blood Moon over the Middle East that occurred in the sign of Ophiuchus/Scorpio on June 15th, 2011. This was also when Barack Obama announced putting more pressure on Israel to comply with UN restrictions against setting up new settlements in east Jerusalem.

In addition, a Grand Cross appeared in the heavens surrounding the Earth on June 26th this year. This was exactly one year after the Grand Cross on Tu B’Av last year. Though some have tried to refute it as an evil sign, the sign of the cross is surely a sign of the Son of Man, Who died on a cross to secure our everlasting salvation from sin and death!

The Grand Cross was evident in the heavens this summer for an unusually long time - from June 26th until June 12th. I therefore suspect that this Grand Cross may have been the Sign of the Son of Man that Yahshua said would appear before the Rapture. See my article “The Rapture Connection to the Sign of the Son of Man” using the following link to find out more about this important sign:

The Rapture Connection to the Sign of the Son of Man:
http://pillar-of-enoch.com/essays/index.html#Son-of-Man

To see all the Heavenly Signs and other dates pertaining to the Two Raptures and the seven-year Tribulation, see my Tribulation Time Chart at: http://pillar-of-enoch.com/essays/trib-timeline.html. You can also view the chart below, though the size is smaller than the image saved at my POEM web site: 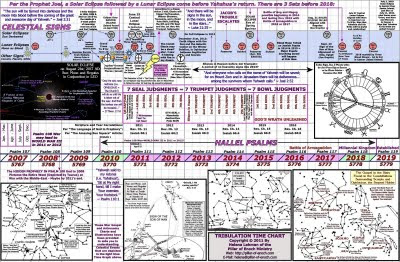 So keep looking UP! Our redemption may be drawing very, very near! Since it is so close, please make every effort to NOT be embroiled in any fighting or bickering with anyone over anything while you await Yahshua’s imminent return. Forgive everyone and hold NO bitterness toward anyone so that Yahshua can forgive you! Also, do your best to stay focused on doing Yahshua’s work of the Kingdom and drawing near to Yahshua in prayer, Bible Study, and worship.

Finally, please ask Yahshua to forgive ALL of your sins and to help you to be like Him in every way through His Spirit, Who can give you many spiritual gifts in keeping with God’s will for your life. In addition, continue to reach out to all the lost or confused while there is still time.

Maranatha and God bless you all!

Email   Website
h
Helena Lehman
Re: Prepare Your Hearts For The Rapture, - CORRECTION

I made a slight error in this article that I've fixed on my POEM blog. Here is the corrected sentence:

Last year, my Oriental Lilies bloomed on Tu B'Av, or the 15th of Av on June 26th, 2010 - at the same exact time that there was a Grand Cross in the heavens formed by four planets lined up in four opposing Zodiac Signs.

The original sentence erroneously reads July 26th. Sorry about that! :-)