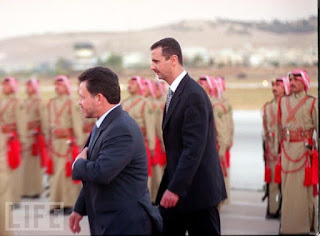 With Arab protests sweeping throughout the Middle East, many pundits are pondering the fate of Jordan. Will the Jordanian government collapse alongside Lebanon’s, Tunisia’s, and Egypt’s? Interestingly, Jordan can be found in end time’s bible prophecy. If the prophecies centered on Jordan are about to find fulfillment, then the best days of the Hashemite Kingdom are behind it.

Someday Jordan will break ties with Israel. It’s simply a matter of time according to Psalm 83:6-8. Making matters worse, Jordan will befriend Israel’s worst enemies in the process. Rather than calling on America and the west at the time of dire need, Psalm 83 predicts they will call on Assyria, which incorporates modern day Syria and Iraq.

Syria is already a proxy of Iran’s and Iraq has been inclined to become one ever since the summer 2010 U.S. troop withdrawal. Thus, allegiance with Syria, Iraq, and by proxy, Iran, appears to be Jordan’s prophetic endgame.

Psalm 83:6-8 lists a group of ten Arab populations that will someday confederate in a final attempt to destroy the state of Israel. The goal of the confederacy is to wipe Israel off of the map and set up one last Arab state called Palestine. Jordan is identified inside the list of nations as Edom, Moab, and Ammon. Their modern day equivalents are showcased inside the image. 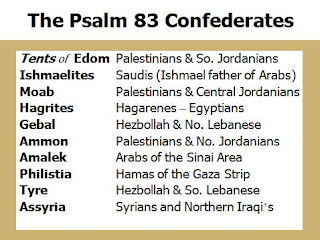 To Jordan’s credit, it appears the Arab nation possibly gets drawn into the war with Israel reluctantly rather than voluntarily. Psalm 83:8 tells us that Jordan is one of the weaker members of the confederacy.

“Assyria also has joined with them; They have helped the children of Lot.” (Psalm 83:8 nkjv)

Asaph, the Psalmist informs us the children of Lot who were Moab, the eldest, and Ammon require assistance in the war effort. They need Assyrian military support. The Hebrew word used for “helped” is zeroa and means forces, power, might, strong arm or shoulder and / or strength. Loosely translated the verse reads Assyria has joined the Psalm 83:6-8 confederacy and become a strong shoulder of military support for Jordan. Note that Assyria’s military support is only given to Jordan. This suggests the other Psalm 83 confederates are not lacking in strength at the time.

In 2010, King Abdullah II of Jordan warned on several occasions that the Middle East was on the verge of war. He told the Chicago Tribune in April, 2010 “The chance of conflict is always very high. War would be disastrous for the Israelis, for the Arabs, for all of us. If we hit the summer and there's no active (peace) process, there's a very good chance for conflict.” When a summertime war was averted he suggested in September 2010 that it could still occur by the end of 2010. The point he was making on both occasions is a Middle East war could break out at any time.

In December of 2010, King Abdullah II met with Iranian President Ahmadinejad in a rare meeting to improve bilateral relations between the two nations. One month later in January of 2011, he phoned Israeli Prime Minister Netanyahu to alert him of his concerns about Iran’s clandestine goals for the Middle East. The Jordanian King warned Netanyahu that Iran aims to form a Shia Crescent inside the Fertile Crescent.

Then in February of 2011 due to protests inside of Jordan, King Abdullah sacked his government in order to avoid escalating protests inside his homeland. King Abdullah’s recent pinball reactions remind us of “Humpty Dumpty’s” sad tale. Humpty Dumpty had a great fall and all the king’s horses and all the king’s men couldn’t put Humpty together again.

Jordan is the fish out of water in the Middle East. If Egypt falls then Jordan will likely soon follow. Egypt’s and Jordan’s treaties with Israel are earning them billions of dollars of American aid. However, many Egyptians and Jordanians are ready to throw their peace treaties out with the baby’s bath water. Even King Abdullah said in 2010 that his country’s economy was better off before his father made peace with Israel in 1994.

If Psalm 83 is racing full speed ahead upon humanity’s horizon, then Mideast events are going to heat up rather than cool down. Understanding the low ranking status and primary purposes of the Jordanian Armed Forces (JAF) sheds light on their need for military support in Psalm 83.

On the Southern Front of Psalm 83 is the Egyptian army that is world ranked at number #17 with an active military personnel strength of 450,000 and active reserves of 254,000. This doesn’t include Hamas units with about 10,000 personnel located out of Gaza and untold scores of Qassam and other assorted rockets, some of which Hamas boasted in 2010 could reach Tel Aviv.

On the Northern Front of Psalm 83 there is Syria, Lebanon, and Hezbollah inside of Lebanon. Syria’s army is world ranked at #34 and has active military of personnel of 296,000 and active military reserve of 132,500. Additionally, many experts believe Saddam Hussein transported his weapons of mass destruction into Syria prior to America’s invasion of Iraq in 2003. Lastly, Syria is thought to have the most advanced scud missiles in the world.

Lebanon’s army is world ranked at #42. Their active military personnel number about 72,000 as of 2008. Hezbollah units in Lebanon have about 1,000 active personnel and reserves estimated at 6,000 to 10,000, and according to Netanyahu has 60,000 rockets. Additionally, in April of 2010 Syria reportedly supplied Hezbollah with scud missiles.

The Eastern Front of Psalm 83 consists of Saudi Arabia, Iraq, and Jordan. The Saudi army is world ranked at #24 and consists of 124,000 active military personnel with an additional estimated 20,000 reservists. Additionally, the Saudis are attempting to procure $60 billion in arms from America and 2 nuclear weapons from Pakistan.

Information about Iraq’s army and arsenal is difficult to access due to its burgeoning relationship with Iran. Much like Hezbollah, Syria, and Hamas, some military analysts suggest Iran is covertly arming the pro-Iranian factions inside Iraq with advanced weapons as well. It appears Iraq is world ranked at #37. They have a relatively new US-trained Army of about 100,000 soldiers with zero reserves and a goal to reach a 200,000-man force. It remains an Army under construction.

The Jordanian Armed Forces (JAF) has descended from the 1940's era British-led "Arab Legion." This force is purely defensive in nature and thus lacks any ranking among the world's armies. The JAF active military personnel number about 100,500 and reserves are estimated at 70,000. Their military mission objectives are to defend:

This means the JAF is a combat ineffective force at best because as a whole it is not designed for and does not train for offensive operations of the type that Psalm 83 has declared will occur. The Jordanian's receive U.S. Army assistance of a technical and hardware nature which is overwhelmingly orientated toward defensive command and control (C2).

Therefore, it is of little prophetic wonder that Israel will literally conquer most of Jordan as a result of the Psalm 83 war, as confirmed by the prophecy in Jeremiah 49:2. Even with the assistance of Syrian and Iraqi forces the Jordanians will lose against Israel. Furthermore, America has taught the new Iraqi military a lot in counter insurgency (COIN) and defensive operations, rather than how to go on the offense against another nation state.

Lastly, we can’t forget the Palestinian Authority, a/k/a “Palestine,” is a lightly armed paramilitary police force known as the “Palestinian National Security Forces” organized into 10 battalions and trained by the U.S. in Jordan.”

In contrast to their Psalm 83 enemies, the Israeli Defense Forces are world ranked at
#11 and their active and reserve forces in Israel number about 600,000 with another 2.8
million immediately available for military service. These additional reserves include
those with prior service and / or some partial training.

Suffice it to say, Israel is outnumbered, outmanned, outgunned, and needs divine
empowerment when it comes time to face off with the Psalm 83 confederacy. In my
book Isralestine, The Ancient Blueprints of the Future Middle East, I describe the
prelude, event, and aftermath of this climatic concluding Arab-Israeli battle.

*** Military specifics above and JAF comments provided by Sean Osborne of the Northeast
Intelligence Network. The Information was primarily collected from the U.S. Library of
Congress; Central Intelligence Agency, GlobalSecurity.Org, and Wikipedia. Sean Osborne’s
web/blogsite is http://eschatologytoday.blogspot.com/


Disclaimer: Rapture Forum, does not necessarily endorse or agree with every opinion expressed in every article posted on this site. We do however, encourage a healthy and friendly debate on the issues of our day. Whether you agree or disagree, we encourage you to post your feedback by using the reply button.