July 24, 2013 – NEW ZEALAND – The fault-line behind the swarm of quakes in central New Zealand may be much longer than previously realized and therefore capable of larger quakes. The National Institute of Water and Atmospheric Research is heading into Cook Strait tomorrow to map the area around the swarm of earthquakes that has been rattling Wellington and Marlborough since Friday. It is hoped the work will identify the fault-line from which the quakes have been generated. GNS Science seismologist John Ristau said that, because the quakes appeared to be happening between the known Vernon and Needles fault-lines, it seemed increasingly likely that the London Hill fault was to blame. In 2003 a Marlborough District Council geotech report described London Hill as a one of “several relatively small faults near the east coast between Seddon and the Waima River.” Dr. Ristau said it now appeared the fault-line might be much longer than originally thought, which meant it could be capable of creating much larger earthquakes. “That means it’s actually considerably longer than initially thought … the larger a fault-line is, the larger the earthquake.” It was important scientists were able to determine exactly which fault the earthquake had occurred on, as it would allow them to establish whether other nearby faults could now produce large earthquakes as a result. It appeared the level of stress had not greatly affected the other Wellington faults, but there were a few lines in the Marlborough region that were capable of creating quakes of magnitude 7 or greater. “If they increase stress, it could trigger a similar-sized earthquake or even a much larger earthquake … hopefully by the end of the week we’ll be able to be a lot more definitive.”

Yesterday, GNS Science seismologist Stephen Bannister said scientists could not rule out the possibility that the quakes could stir up other faults and “kick off” the Alpine Fault. He said the biggest misconception the public had when it came to earthquakes was that small ones minimized or took “the edge off” the possibility of a large one occurring. However, GNS Science spokesman John Callan said the recent swarm of quakes east of Seddon was “not increasing or decreasing the risk of a quake on the Alpine Fault.” He said the quakes were too far away to affect the Alpine Fault, which stretches 600 kilometers from Milford Sound along the western Southern Alps to Marlborough and is the on-land boundary between the Pacific and Australian tectonic plates. Recent research led by GNS Science found it last ruptured 296 years ago, and it predicted a 30 per cent chance of a big quake along it in the next 50 years. The average interval between large quakes on the fault was 330 years. In the past 8000 years it had ruptured 24 times and caused magnitude-8 quakes, including four in the past millennium. The longest gap between major quakes was 510 years and the shortest 140 years. “An earthquake on the Alpine Fault in the near future would not be a big surprise. Equally, it could be many decades away, based on its past behavior,” Callan said. “There is no better time than the present to prepare for the next quake on the Alpine Fault. The more thoroughly we prepare, the lower the eventual impact will be.” He said work was under way to prepare to drill a deep borehole into the fault early next year to study processes taking place at depth inside a major plate boundary fault. GNS Science is jointly leading the Deep Fault Drilling Project with Otago and Victoria universities, and it involved 22 organizations from eight countries. –Stuff

July 24, 2013 – SEATTLE - A new study has found that heat waves are increasing in the western portions of the Pacific Northwest, but not the kind most people envision, with scorching hot days of temperatures reaching triple digits. These heat waves occur at night. Researchers documented 15 examples of “nighttime heat waves” from 1901 through 2009 and 10 of those have occurred since 1990. Five of them took place during a four-year period from 2006-09. And since the study was accepted for publication in the Journal of Applied Meteorology and Climatology, another nighttime heat wave took place at the end of this June, the authors point out. “Most people are familiar with daytime heat waves, when the temperatures get into the 100s and stay there for a few days,” said Kathie Dello, deputy director of the Oregon Climate Service at Oregon State University and a co-author on the study. “A nighttime heat wave relates to how high the minimum temperature remains overnight. “Daytime events are usually influenced by down slope warming over the Cascade Mountains, while nighttime heat waves seem to be triggered by humidity,” said Dello, who is in OSU’s College of Earth, Ocean, and Atmospheric Sciences. “Elevated low-level moisture at night tends to trap the heat in.” In their study, Dello and co-authors Karin Bumbaco and Nicholas Bond from the University of Washington defined heat waves as three consecutive days of temperatures at the warmest 1 percentile over the past century. Using that standard criterion, they documented 13 examples of daytime heat waves during the time period from 1901 to 2009. Only two of those occurred in the last 20 years.

In contrast, nighttime heat waves have been clustered over the past two decades, with what appears to be accelerating frequency. A warming climate suggests the problem may worsen, studies suggest. “If you look at nighttime temperatures in Oregon and compared them to say the Midwest, people there would laugh at the concept of a Pacific Northwest heat wave,” Dello said. “However, people in the Midwest are acclimated to the heat while in the Northwest, they are not. People in other regions of the country may also be more likely to have air conditioning in their homes. On occasion, daytime and nighttime heat waves coincide, Dello said, as happened in 2009 when temperatures in the Pacific Northwest set all-time records in Washington (including 103 degrees at SeaTac), and temperatures in Oregon surpassed 105 degrees in Portland, Eugene, Corvallis and Medford. It was the second most-intense daytime heat wave in the last century, but lasted only three days by the 1 percentile definition. However, that same stretch of hot weather in 2009 results in a nighttime heat wave that extended eight days, by far the longest stretch since records were kept beginning in 1901. The latest nighttime heat wave began in late June of this year, and continued into early July, Dello said. “Like many nighttime heat waves, a large high-pressure ridge settled in over the Northwest, while at the same time, some monsoonal moisture was coming up from the Southwest,” she pointed out. “The high swept around and grabbed enough moisture to elevate the humidity and trap the warm air at night.” –Space Daily

July 22, 2013 – JAPAN – A strong vulcanian explosion occurred last night at 11:02 GMT (20:02 local time), following several hours of near complete calm at the volcano. A loud cannon-shot bang accompanied the explosion, which generated a large mushroom cloud that reached 12,000 ft (3.7 km) altitude and engulfed the NE half of the Sakurajima peninsula and was followed by several smaller ones within about half an hour. The volcano and much of the surrounding areas remained under the ash plume for several hours until it started to clear up again. In the hours after the explosion, the Showa crater continued to emit ash plumes in often near-continuous pulses, sometimes reaching several 100 m height, but with no visible incandescence or audible sounds. –Volcano Discovery 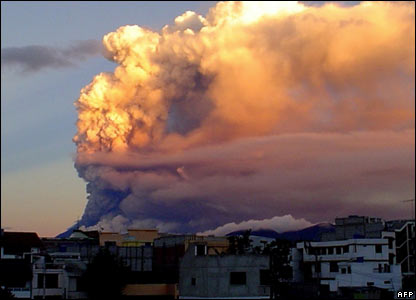 Large explosions at Ecuador volcano: An increase of activity occurred yesterday. IGPEN recorded 3 strong pulses of volcanic tremor since midnight 20-21 July (local time), which were accompanied by strombolian activity and strong explosions that produced loud roars, heavy gunfire sounds, and vibrations that rattled floors, windows and doors of houses in areas nearby. Some were heard even in the Tungurahua Volcano Observatory (OVT), located 14 km north of the volcano. The largest explosion yesterday at 14h18 (local time) generated an eruption column of 5 km height moving east. Although so far there have been no new pyroclastic flows, this could likely happen in the near future. Ash fall occurred in the area of ​​Manzano, Choglontus, Tisaleo, Cevallos and Mapayacu. In between the explosions, constant strombolian activity with the ejection of incandescent bombs, some of which rolled down the slopes could be seen at night. The explosions caused considerable damage to some of the monitoring instruments (solar panels, cameras etc.). –Volcano Discovery