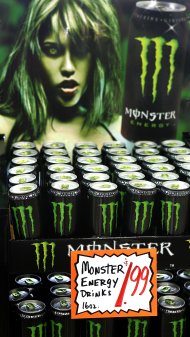 Five people may have died in recent years after drinking Monster Energy, a popular energy drink that is high in caffeine, according to incident reports recently released by the Food and Drug Administration.

The reports, like similar filings made with the F.D.A. in cases connected with drugs or medical devices, do not prove a link between Monster Energy and the deaths or health problems. The records were recently obtained under the Freedom of Information Act by the mother of a 14-year-old Maryland girl who died in December from a heart arrhythmia after drinking large cans of Monster Energy on two consecutive days.

(Tim Boyle/Getty Images)Last week, Wendy Crossland, the mother of that teenager, filed a lawsuit against Monster Beverages, a publicly traded company in Corona, Calif., that used to be known as Hansen Natural. The lawsuit charges that Monster failed to warn about the risks of its energy drinks; a spokeswoman for the company said last week that its products were safe and not the cause of the teenager’s death.

That spokeswoman, Judy Lin Sfetcu, added that Monster was “unaware of any fatality anywhere that has been caused by its drinks.”

In an interview, an F.D.A. spokeswoman, Shelly Burgess, said the agency had received reports of five deaths possibly linked to the drink as well as another report of a heart attack. The reports cover a period of 2004 to June of this year.

The reports do not make clear whether the incidents involved other factors, like alcohol or drugs. However, the number of reports that the F.D.A. receives about any product it regulates usually understates by a large degree the actual number of problems.

The release of the filings about Monster Energy may increase Congressional calls for greater regulation of the energy products industry. Monster Energy is among scores of energy drinks like Red Bull and Rock Star, and energy “shots” like 5-hour Energy, that companies are aggressively marketing to teenagers and young people.

In a statement, Ms. Burgess, the F.D. A. spokeswoman, said that it was the responsibility of energy drink manufacturers to investigate accusations of death or injuries associated with them. She said that the agency was still looking into the cases but had yet to establish a causal link between the deaths and the drink.

Monster Beverage makes a variety of energy drinks with names like Monster Rehab, Monster Assault and Monster Heavy Metal. Labels on the containers state that they are “not recommended” for some consumers, including children — a group that beverage producers define as those under 12 years — and people “sensitive” to caffeine.

Monster Energy did not immediately respond Monday to a request for comment on the F.D.A. filings.

Under current F.D.A. rules, companies do not need to disclose caffeine levels in their beverages and can choose to market them as drinks or as dietary supplements. Those various regulatory categories have differing labeling and ingredient rules.

While healthy adults can consume large quantities of caffeine from sources like coffee, tea and energy drinks, the drug, which acts as a stimulant, can pose risks to those with underlying conditions like heart disorders.

The type of 24-ounce can of Monster Energy that the Maryland teenager, Anais Fournier, drank contains 240 milligrams of caffeine, three times the amount found in an

unce can of Red Bull and about 50 milligrams more than in the 20-ounce size of Red Bull.

The lawsuit filed last week on behalf of the teenager referred to autopsy and medical examiner reports that said she had died of “cardiac arrhythmia due to caffeine toxicity” that had exacerbated an existing heart problem.

A lawyer for her family, Kevin Goldberg, said that the 14-year-old had been aware she had an underlying condition but added that her doctors had not told her to restrict her physical activities or her caffeine use.

In August, F.D.A. officials responded by saying that there was insufficient evidence to take action on caffeine levels in energy drinks. However, the agency also noted then that it had not yet received medical reports related to the Maryland teenager’s death.