September 9, 2012 – KURIL ISLANDS – On Sunday, two earthquakes hit Kuril Islands in the Russian Far East. The first quake of 6.0 point magnitude on the Richter scale was recorded near the island of Paramushir, says seismological station in the city of Severo-Kurilsk. Glass-ware ringed in cupboards for ten seconds, and ceiling lamps rocked. The second earthquake with a magnitude of 5.1 points in Richter scale took place in the deep-water Kurilo-Kamchatka trench. The epicenter was located 270 kilometers east of the city of Kurilsk on the island of Iturup. There was no tsunami warning. –VOR 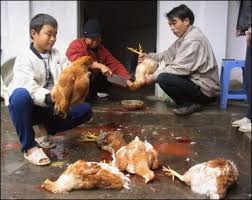 September 9, 2012 – VIETNAM – A new highly-toxic strain of the potentially deadly bird flu virus has appeared in Vietnam and is spreading fast, according to state media reports. The strain appeared to be a mutation of the H5N1 virus which swept through the country’s poultry flocks last year, forcing mass culls of birds in affected areas, according to agriculture officials. The new virus “is quickly spreading and this is the big concern of the government”, Deputy Minister of Agriculture and Rural Development Diep Kinh Tan said, according to a Thursday report in the VietnamNet online newspaper. Experts cited in the report said the new virus appeared in July and had spread through Vietnam’s northern and central regions in August. Outbreaks have been detected in six provinces so far and some 180,000 birds have been culled, the Animal Health department said. The Central Veterinary Diagnosis Centre said the virus appeared similar to the standard strains of bird flu but was more toxic. The centre will test how much protection existing vaccines for humans offer, the report said. Some experts suggested that the new strain resulted from widespread smuggling of poultry from China into the northern parts of Vietnam. According to the World Health Organization, Vietnam has recorded one of the highest numbers of fatalities from bird flu in Southeast Asia, with at least 59 deaths since 2003. The avian influenza virus has killed more than 330 people around the world, and scientists fear it could mutate into a form readily transmissible between humans, with the potential to cause millions of deaths. -BP 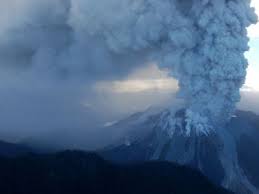 September 8, 2012 – NICARAGUA – Nicaragua’s tallest volcano belched an ash plume up to 2 1/2 miles (4 km) into the atmosphere on Saturday, prompting the evacuation of hundreds of nearby residents who heard eruptions emanating from its crater. There were no immediate reports of injuries or damage, authorities said. The 5,725-foot (1,745-meter) San Cristóbal volcano, located about 95 miles (150 km) north of the capital Managua in the country’s volcano-dotted northwest, has been active in recent years, and stirred in mid-2008, when it expelled gas and rumbled with a series of small eruptions. The government expects to evacuate about 3,000 people from around San Cristobal, though numerous families already have done so on their own, said Guillermo Gonzalez, who heads Sinapred, a government emergency and disaster relief agency. “We already have nearly the entire apparatus underway,” Gonzalez said. “A response plan exists for volcanic eruptions and every community has clearly defined places for people to go to once they are evacuated,” he said. A gas and ash plume stretched between 2 and 2 1/2 miles (3.5 and 4 km) into the atmosphere, Gonzalez said. The Nicaraguan Institute of Territorial Studies, which monitors the country’s volcanoes, said in a preliminary report that “more gas emissions and sporadic explosions” could be expected from San Cristobal. The volcano is one of the most active along Nicaragua’s Pacific coast, according to the institute, and often averages nearly 100 daily seismic movements. Government spokeswoman Rosario Murillo earlier said authorities were still assessing the strength of the volcanic activity. As many as 20,000 people could ultimately be affected, she said. –Euro News

September 8, 2012 – INDONESIA - A moderately strong earthquake has hit eastern Indonesia, causing panic among residents, but there were no immediate reports of damage or injuries. No tsunami warning was issued. The U.S. Geological Survey says the 6.1-magnitude quake struck off the eastern province of Papua. It says it was fairly shallow, just 20 kilometers beneath the sea, which often causes more shaking than deeper quakes. Witnesses said shocked residents and hotel guests in Nabire town ran outside screaming. Indonesia’s meteorology and geophysics agency said there was no danger of a tsunami. Indonesia has frequent earthquakes because of its location on the Pacific “Ring of Fire,” an arc of volcanoes and fault lines encircling the Pacific Basin. –The Australian

Indonesia: Increasing seismicity, growing volcanic unrest, and the largest intra-plate strike-slip earthquakes ever recorded (April 11), are all indications seismic unrest and agitation along tectonic plates is intensifying around Indonesia. The day of reckoning is approaching. The country is home to more than 136 active volcanoes, including about 76 of which are said to have erupted during the Holocene period. The turbulent geology both in and around Indonesia, has placed the region in the cross-hairs of the geologic dynamism and change stirring across the planet. The chances of another VEI 7 Tambora-type eruption occurring in the near future, from a volcano somewhere in the Indonesian archipelago volcanic chain, are also high. Such a large-scale volcanic eruption today would have devastating and almost incalculable consequences on most of the world. –The Extinction Protocol 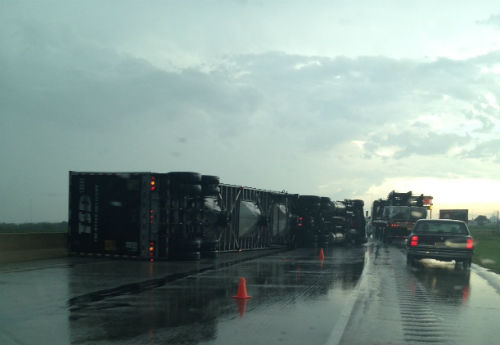 September 8, 2012 –NOWATA, Okla. – Authorities say four people — including an infant — have been killed as thunderstorms swept through northeast Oklahoma. Nowata County Undersheriff Doug Sonenberg tells KSWO-TV, the infant and two adults were killed Friday when heavy winds destroyed a mobile home. They were found in a creek. The Oklahoma Highway Patrol also reported that Ash Grove, Mo., resident Jimmy King was killed when straight-line winds flipped the semi he was driving onto a cement barrier wall and trapped him inside near Afton. Troopers say the 70-year-old King was pinned in the wreckage for nearly three hours and died at the scene of massive injuries. The storms were part of a system that unleashed winds of 25 mph to 35 mph as it moved through the state. –Yahoo News 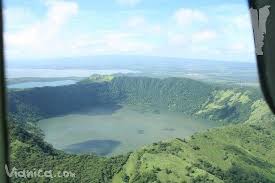 September 8, 2012 – MANAGUA – The Apoyeque Volcano, located northwest of the capital, was calm Friday, but officials continued monitoring it for volcanic tremors, a release from the Nicaraguan Institute of Territorial Studies (INETER) said. The agency registered 21 low-intensity volcano-related tremors between Thursday afternoon and Friday morning, prompting the government to issue a green advisory alert. Seismic activity near the volcano, located 10 kilometers northwest of Managua, “decreased Friday morning, but it doesn’t mean that it has disappeared,” INETER Geophysics Director Angélica Muñoz told reporters. She also announced that a group of experts will travel to the volcano to investigate the earthquakes causes. The volcanic tremors began after a magitude- 7.6 earthquake hit neighboring Costa Rica on Wednesday. –Tico Times


The last eruption of the volcano was in 50 B.C. The volcano is capable of VEI 6 stage eruptions. 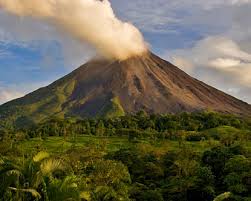 Four volcanoes in Costa Rica closely monitored after quake: When seeing the after effects of the earthquake in Costa Rica this past week, one thing that needs to be watched closely is the active volcanoes within the country. Even a small shift under one of these giants could cause an eruption. At least four of the seven active volcanoes in the country are in the crosshairs of scientists after the earthquake of 7.6 magnitude occurred on Wednesday in Costa Rica. These are Arenal (Alajuela), Rincon de la Vieja (Guanacaste), Turrialba (Cartago) and Poás (Alajuela). According to specialists agree Volcanological and Seismological Observatory of Costa Rica (OVSICORI-A) and the National Seismological Network (RSN: ICE-UCR), due to the size of the earthquake, it is normal volcanic structures; especially those already vulnerable are affected. There is a rearrangement of material and even chemical changes. The clearest example is the Arenal, where locals reported a noise characteristic of rolling boulders.” We know there is a cave in the north, in the direction of the community of La Palma,” said Maria Martinez geochemistry, OVSICORI. A team of this institution made field visit to the site and will release more information today. “In the Poas, how little we could see the rangers (by weather), report no noticeable landslides and cracks,” he added. However, Raul Mora, the RSN, ensures that the most noticeable changes have been in its lagoon.” It looks much sulfur yellow spots on the lake, which is average at Poás before the earthquake but were not.” In the Turrialba volcano has reported a slight collapse, but “the bottom” of the colossus, rather than volcanic structure.” The emission level is similar to what was observed previously,” said the expert OVSICORI. Because there have been earthquakes there, the RSN yesterday decided to install a seismological station between between that and the Irazu volcano. This is done so that in the medium term is uncertain whether the earthquakes that occur there (as replicas) are the result of a tectonic or volcano itself. Scientists have not yet visited the Rincon de la Vieja, but have received reports from neighbors (who live about 17 miles west of the volcano), who claim that the crystalline water normally receive from a nascent nearby nature has a milky consistency apparently mixed with sulfur. “He also mentioned alleged cracks opened in the north, but we have not confirmed. We also know that, from time to time, there looms a steam plume. That happens from days before the earthquake,” explained Martinez. “We know from experience in other countries that movements after more than 7 degrees of intensity there is the possibility that changes occur in the activity of volcanoes,” said Mora. “We’re not saying there’s a risk. What we say is that it is best to take the pulse investigate,” he said Mora. –Costa Rican Times