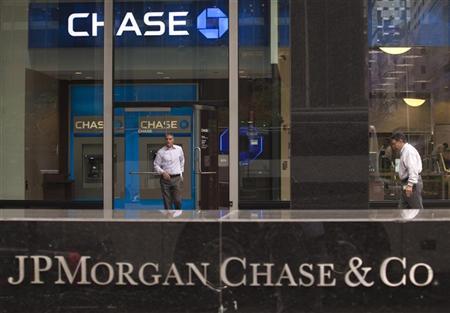 By David Henry and Dave Clarke

NEW YORK/WASHINGTON (Reuters) - Five of the biggest banks in the United States are putting finishing touches on plans for going out of business as part of government-mandated contingency planning that could push them to untangle their complex operations.

The plans, known as living wills, are due to regulators no later than July 1 under provisions of the Dodd-Frank financial reform law designed to end too-big-to-fail bailouts by the government. The living wills could be as long as 4,000 pages.

Since the law allows regulators to go so far as to order a bank to divest subsidiaries if it cannot plan an orderly resolution in bankruptcy, the deadline is pushing even healthy institutions to start a multi-year process to untangle their complex global operations, according to industry consultants.

"The resolution process is now going to be part of the cost-benefit analysis on where banks will do business," said Dan Ryan, leader of the financial services regulatory practice at PricewaterhouseCoopers in New York. "The complexity of the organizations will shrink."

JPMorgan Chase & Co (JPM.N), Bank of America Corp (BAC.N), Citigroup Inc (C.N), Goldman Sachs & Co (GS.N) and Morgan Stanley (MS.N) are among those submitting the first liquidation scenarios to regulators at the Federal Reserve and the Federal Deposit Insurance Corp, according to people familiar with the matter.

The five firms, which declined to discuss their plans for this story, have some of the biggest balance sheets, trading desks and derivatives portfolios of financial institutions in the United States.

Great Britain and other major countries are imposing similar requirements for "resolution" plans on their big banks, too.

The liquidation plans are coming amid renewed questions about the safety of big banks following JPMorgan's stunning announcement last month that a trading debacle has cost it more than $2 billion - a sum far too small to endanger the bank, but shocking enough to bring back memories of the financial crisis.

A NOD TO GLASS-STEAGALL

If the extensive planning and review process works as proponents hope, big banks will become less hazardous to the public and regulators will be more confident that they can let wounded institutions die without wrecking the economy.

In congressional hearings earlier this month, JPMorgan CEO Jamie Dimon said that the bank's contingency plan for going out of business would let it fail without cost to taxpayers. Living wills reduce the systemic risk of a big bank failing, Dimon said.

Bair said regulators may determine that for a liquidation plan to work, a bank must separate traditional banking and insured deposits into subsidiaries set apart from volatile securities trading and securities underwriting.

The rules push banks to untangle their complex structures, which can include thousands of legal entities, and which, in Bair's opinion, have effectively blocked proposals for breaking up the corporations.

Whether the Fed and the FDIC would actually force any banks to sell businesses or cordon off insured deposits remains to be seen, cautioned Richard Herring, a banking professor at the University of Pennsylvania.

"We don't know if they will have the guts to do it, but the tools are there," said Herring, a leading proponent of living wills for more than a decade, who was appointed to an FDIC advisory panel on the plans.

Herring worries, too, that the plans will be so long and complex that they will overwhelm the staff at the agencies.

Still, that the plans are being written at all is progress, Herring said.

PLAN FOR TWO WAYS TO DIE

Under the Dodd-Frank Act, banks and regulators must imagine liquidations in two different ways. The first is through bankruptcy courts with banks negotiating with their creditors. This is the going-out-of-business method planned in the living wills due July 1. The living wills must include how subsidiaries in foreign jurisdictions will be liquidated.

The second way is through a new kind of liquidation process in which the FDIC takes control of putting a financial giant down. This method has more flexibility than is allowed in bankruptcy courts, but still uses critical information collected in the banks' living wills, such as where exactly to find collateral.

The new rules stagger deadlines for the banks to file plans, depending on their size and complexity. Nine banks will file first, including five based in the United States and four owned abroad. Regulators have declined to name the nine banks included in the first round.

Regulators and the big banks have been meeting since January on what the plans are expected to include. Fed and FDIC officials have said they expect the back-and-forth to continue once the plans have been submitted.

The rules give the banks a series of chances to refine their plans.

But if banks cannot come up with feasible liquidation plans, regulators could order the banks to get rid of businesses.

Government intervention is a last resort, said John Simonson, the FDIC's deputy director of Systemic Resolution Planning and Implementation in the Office of Complex Financial Institutions.

"I think a lot of progress can be made in having these firms make themselves more resolvable before you get to that point of actually imposing those severe remedies," Simonson said.

The regulators will want to see evidence that the banks can safely resolve their debts and transfer vital customer services and assets to healthy institutions.

The plans could easily be 2,000 or 4,000 pages long, depending on the complexity of the banks, said Ryan of PricewaterhouseCoopers. The plans include "very granular detail" about bank operations, he noted, adding that "in many cases, this is a large documentation exercise."

For example, the banks must spell out plans for hiring lawyers and contacting regulators in key countries.

The rules for crafting the living wills are 74 pages long, including an explanatory supplement. The plans could even include drafts of press releases showing how the banks would announce that they are going out of business, Herring said.

The plans are to include summaries for the public, but most of the data will be kept confidential at the request of the banks concerned about revealing trade secrets, according to the rules.

The FDIC has not said when the summaries would be released.

The regulators estimated it will take all of the 124 banks combined about 1.3 million hours of work to write their initial plans, and each year afterwards, 267,544 hours to keep them up to date. A 40-hour work week for a single employee equals 2,080 hours a year.