Matthew 24:38 “For as in the days that were before the flood, they were eating and drinking, marrying and giving in marriage, until the day that Noe entered into the ark”

The 15th of Av: Love and Rebirth
The Jewish Mini-Holiday of Tu B’Av 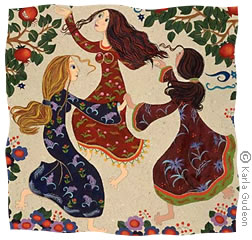 The 15th of Av is undoubtedly the most mysterious day of the Jewish calendar. A search of the Shulchan Aruch ( “Code of Jewish Law” ) reveals no observances or customs for this date, except for the instruction that the tachanun ( confession of sins ) and similar portions should be omitted from the daily prayers (as is the case with all festive dates ) , and that beginning on the 15th of Av one should increase one’s study of Torah, since at this time of the year the nights begin to grow longer, and “the night was created for study. ” And the Talmud tells us that many years ago the “daughters of Jerusalem would go dance in the vineyards” on the 15th of Av, and “whoever did not have a wife would go there” to find himself a bride. (15th of Av 2012 is August 3rd 2012)

And this is the day which the Talmud considers the greatest festival of the year, with Yom Kippur ( ! ) a close second!

Indeed, the 15th of Av cannot but be a mystery. As the “full moon” of the tragic month of Av, it is the festival of the Future Redemption, and thus a day whose essence, by definition, is unknowable to our unredeemed selves.
The 15th of Av this year is August 3, 2012 (Summer time)

The 15th of Av is the day where people were celebrating, eating and drinking, marrying and giving in marriage.

Matthew 24:32-33 “Now learn a parable of the fig tree. When his branch is yet tender and putteth forth leaves, ye know that summer (is it rapture?) is nigh: so likewise ye, when ye shall see all these things, know that it is near even at the doors”


From Wikipedia, the free encyclopedia


Tu B'Av (Hebrew: ט"ו באב, the fifteenth of the month Av) is a minor Jewish holiday. In modern-day Israel, it is celebrated as a holiday of love ( Hebrew: חג האהבה‎, Hag HaAhava ) , similar to Valentine's Day.[1][2] It is considered a very desirable date for Jewish weddings.

According to the Talmud, Tu B'Av was a joyous holiday in the days of the Temple in Jerusalem, marking the beginning of the grape harvest. Yom Kippur marked the end of the grape harvest. On both dates, the unmarried girls of Jerusalem would dress in white garments and go out to dance in the vineyards. ( Babylonian Talmud, tractate Ta'anit 30b-31a ) [ 3 ] That same section in the Talmud states that there were no holy days as happy for the Jews as Tu B'Av and Yom Kippur.[ 4 ] The holiday celebrated the wood-offering brought in the temple ( see Nehemiah 10:35 ). Josephus refers to it as the Feast of Xylophory ("Wood-bearing").[ 5 ]

Various reasons for celebrating on Tu B'Av are cited by the Talmud and Talmudic commentators:[ 6 ]

While the Jews wandered in the desert for forty years, female orphans without brothers could only marry within their tribe, to prevent their father's inherited land in the Land of Israel from passing on to other tribes. On the fifteenth of Av of the fortieth year, this ban was lifted.

That same year, the last of the generation of the sin of the spies, which had been forbidden to enter the Promised Land, found that they were not destined to die. For forty years, every Tisha B'av night, the Jews made graves for themselves which they slept on Tisha B'av; every year a proportion of them died. In the 40th year, the fifteen thousand who had remained from the first generation went to sleep in the graves and woke up the next day to their surprise. Thinking they made a mistake with the date, they did this until they reached Tu B'Av. Only then did they know they were allowed to live.

The Tribe of Benjamin was allowed to intermarry with the other tribes after the incident of the Concubine of Gibeah (see Judges chapters 19-21 ).

Cutting of the wood for the main altar in the Temple was completed for the year.
The nights, traditionally the ideal time for Torah study, are lengthened again after the summer solstice, permitting more study.
The Roman occupiers permitted burial of the victims of the massacre at Bethar. Miraculously, the bodies had not decomposed, despite exposure to the elements for over a year.

Tu B'Av marks an informal "high" to counter the "low" of the The Three Weeks leading up to Tisha B'Av. Tu B'Av does not have many established religious rituals associated with its celebration. However Tachanun is not said—neither at mincha the day before nor on the day itself—and a bride and groom traditionally do not fast if their wedding falls on Tu B'Av.[ 7 ]

In modern times it has become a Jewish Valentine's Day and a popular day for weddings, proposals and romantic dates.[ 8 ]

Hope find something that make me excited again ....

Forget about the failed dates and read and look at the bible prophecy that are coming together before our very eyes.

Israel is soon to be involved in some type of war?
1) Isaiah 17 ( Damascus to be a ruinous heap?)
2) Psalms 83 War ( A confederation of enemies come against Israel?)

These things are shaping up as we speak.

Gimel, I know your time is limited but watch the Mike Hoggard series on the rapture if you can.

Mike seems to think that the rapture will be a pre tribulation event.

Pre Tribulation Rapture
Click on this link to view

A couple of things still to look for:

1) The total destruction of the wailing wall (by an earthquake or ? )

All these events can happen at anytime and the rapture could happen soon as well.

Keep looking UP our redemption draw nigh.

Thanks Steven, but apparently I cannot watch any videos right now. Not because of my time limited but I am currently in one Asian country with very weak internet band. I could only see my email and reply the message and read the news and nothing more. It's very slow here not like in the US ... so meanwhile just tell me what it is all about that Mike Hogard talk ...
If I try to open any videos, it will make my laptop hang... jammed .... stopped :) ....