The Mazzaroth Gospel - Stars and Scriptures

This enlarges on the Mazzaroth Gospel presentation by showing the actual Scripture verses that are referenced on the Charts for each constellation and star named.


How the Heavens Declare the Glory of God
"Then the Lord answered Job out of the whirlwind, and said.... Canst thou bind the sweet influences of Pleiades, or loose the bands of Orion? Canst thou bring forth MAZZAROTH (i.e., the twelve constellations of the zodiac) in his season? or canst thou guide Arcturus with his sons?” (Job 38:31,32).

Answer: Scripture is clear: God Himself named the stars.

“He telleth the number of the stars; He calleth them all by their names” (Psalm 147:4).

“Lift up your eyes on high, and behold who hath created these things, that bringeth out their host by number: He calleth them all by names by the greatness of His might, for that He is strong in power; not one faileth” (Isaiah 40:26). See Job 38:31,32, where God recites star names.

2. WHY did God name the stars?

Answer: To provide prophetic signs ordered according to their appointed times (i.e., “seasons”

“And God said, Let there be lights in the firmament of the heaven to divide the day from the night; and let them be for signs (othoth, signifying something to come), and for seasons (moed, a fixed or an appointed time), and for days, and years” (Genesis 1:14). See Romans 10:18.

3. WHAT is the message declared by the stars?

Answer: The glory of God that is “above the heavens” (Psalm 8:1), as seen in the Person and work of God the Son, Jesus Christ, the promised Seed of a woman, as foretold in the first Messianic prophecy (Genesis 3:15), declaring that our Savior would eventually defeat Satan (i.e., bruise the serpent’s head), though He would suffer (bruising His own heal) to redeem His people from their sins and take them safely home to heaven.

“O LORD our Lord, how excellent is thy name in all the earth! Who hast set thy glory above the heavens... The heavens declare the glory of God” (Psalm 8:1, 19:1).

“For God, who commanded the light to shine out of darkness, hath shined in our hearts, to give the light of the knowledge of the glory of God in the face of Jesus Christ” (2 Corinthians 4:6). See also Hebrews 1:3.

“And I will put enmity between thee [Satan, embodied in the serpent] and the woman, and between thy seed and her Seed; it shall bruise thy head, and thou shalt bruise His heel” (Genesis 3:15). This is the central theme.

Example: God called Abram out of Ur of the Chaldees where astrology, abhorrent to God (Deut. 18:10-12, Isaiah 47:13,14), had flourished. God commanded Abram: “Look toward heaven, and tell (narrate) the stars, if thou be able to number (name them one by one) them. And He said, So shall thy Seed be (singular, referring to Christ; see Galatians 3:16). And he believed in the Lord; and He counted it to him for righteousness” (Genesis 15:5).

Abram knew the star names and where to begin naming them. Beginning at Virgo he would have recited words such as: “VIRGO, SUBILAH, ZAVIJAVA, SPICA/TSEMECH¹, VINDEMIATRIX, COMA, IHESU, CHRISTOS, BOOTES, ARCTURUS, NEKKAR, AGENA, TOLIMAN,” which translates: “The virgin who carries the gloriously beautiful Seed, the Branch (Messiah), the Son who comes down to rule, the desired Son, Jesus, the Christ, the coming Shepherd, the Pierced, the despised Sin Offering, the Beginning and the End.”

4. WHERE do we find specific star names in Scripture?

Answer: Primarily in the Book of Job, acknowledged by God Himself in the series of questions that He posed to Job, showing also the common knowledge of the star names among the ancient patriarchs of that dispensation.

“Canst thou bind the sweet influences of Pleiades, or loose the bands of Orion? Canst thou bring forth Mazzaroth (the constellations) in his season? or canst thou guide Arcturus with his sons?” ( Job 38:31,32 ).

“[ God ] alone spreadeth out the heavens...which maketh Arcturus, Orion, and Pleiades, and the chambers (constellations) of the south” ( Job 9:9 ).

“By His spirit He hath garnished the heavens; His hand hath formed the crooked serpent” ( Job 26:13 ).
-Note: SERPENS and HYDRA are two examples of this.

5. WHEN were the star names first given in human history?

Answer: Most likely incident to the fall of man, providing and preserving an exposition on the first Messianic promise given to humanity in Genesis 3:15.

The obvious familiarity of the star names in the book of Job (accepted as the oldest book in the Bible) testifies to the antiquity handed down by Adam to his descendants. Ancient planispheres and star charts in virtually every civilization bear witness to a single, Divine origin by their phenomenal unity, as observed in China, India, Babylonia, Persia, Egypt, Israel, Greece, Rome, Scandinavia, and in Central America.

*Note: The following constellation illustrations incorporated with my charts are reproduced from Kenneth Fleming's excellent book entitled God's Voice in the Stars, and are used here with the author's permission.


1. Virgo: Christ the Incarnate Son, the Seed of the Woman 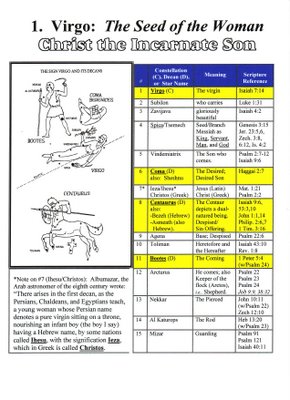 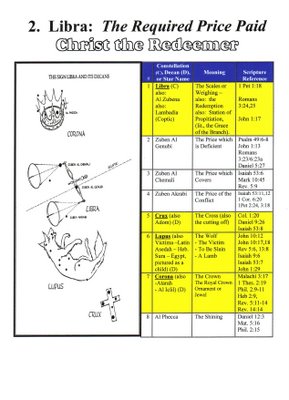 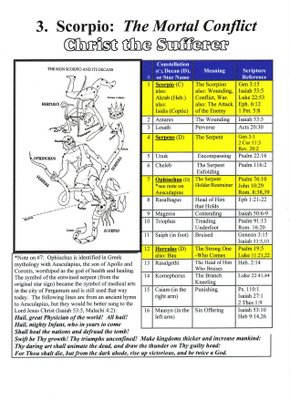 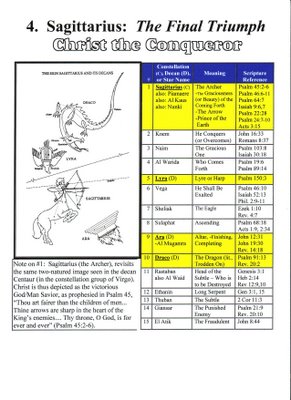 5. Capricornus: Christ the Sacrifice, Life Out of Death 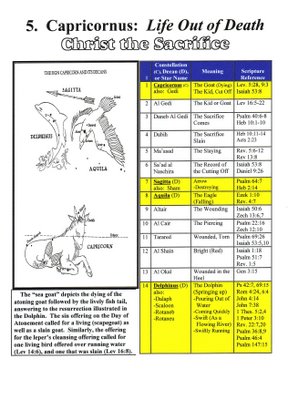 6. Aquarius: Christ the Living Water, Blessing Out of Victory 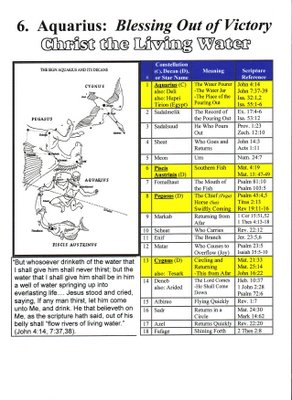 7. Pisces: Christ the Liberator, Deliverance Out of Bondage 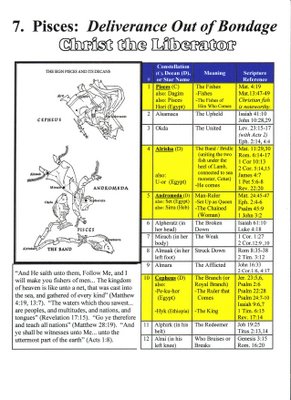 8. Aries: Christ the Crowned Lamb, Glory Out of Humiliation 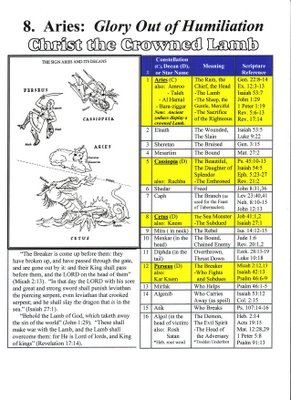 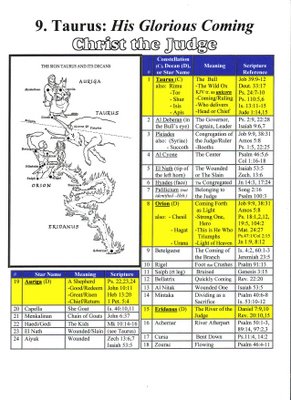 10. Gemini: Christ the King, His Rule on Earth 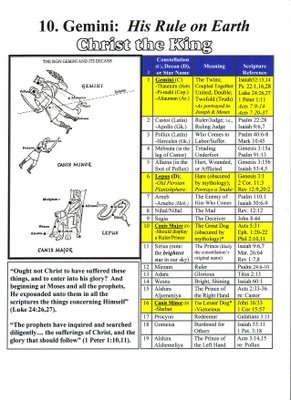 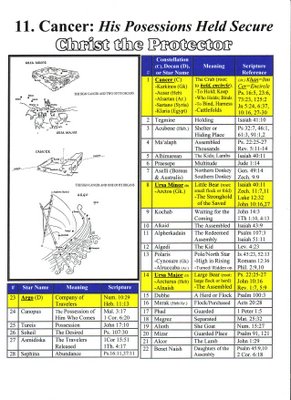 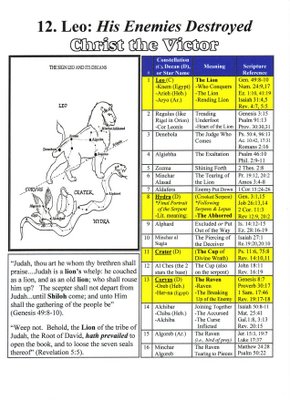