January 8, 2012 – INDONESIA – The National Disaster Mitigation Agency has warned that seven volcanoes located across the archipelago are on alert statuses. The agency said it has prepared measures for the worst-case scenarios and officials met on Saturday to discuss the measures, said agency spokesman Sutopo Purwo Nugrowo. The seven volcanoes are Papandayan Mountain in West Java, Karangetang and Lokon in North Sulawesi, Ijen in East Java, Gamalama in North Maluku, Anak Krakatau in Lampung and Lewotolo in East Nusa Tenggara. Sutopo said the agency was closely monitoring each volcano, and that mitigation measures varied in each region because of the different characteristics of the volcanoes and the territories. However, he said, in general, the agency has planned evacuation routes, sites for refugees, logistics supplies, machinery and volunteer mapping. “The plan is standardized, but we keep renewing it to adjust to current conditions. For Papandayan, we have a done dry-run three times so the people could get used to the measures,” he said. On Friday, Lokon Mountain erupted, spewing volcanic ash up to 1,500 meters high, but it had calmed down by Saturday morning and people living near the mountain were not evacuated. In North Maluku, some 296 people remain in refugee shelters in Dufa-Dufa following Mount Gamalama’s last eruption in early December. -Jakarta Globe


Mother Nature unleashes her fury in first week of 2012 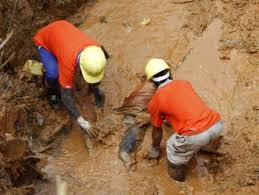 January 8, 2012 – MANILA – Philippine rescuers dug through rock and mud Friday looking for people feared buried by a deadly landslide at a remote gold mining community, as officials vowed to shut down unsafe mine sites. At least 25 people were killed on Mindanao island before dawn on Thursday when a rock and mud avalanche buried a mountain settlement of gold prospectors who had refused to leave an area declared too dangerous for habitation. However, the national government began to back away from the previous official figure of 150 people missing, saying only eight of them are known by name and there were no reliable census figures at the gold rush site. “I think that is exaggerated,” civil defense chief Benito Ramos told AFP, adding the original estimate was given by local officials in the area who extrapolated the figure from the number of buried shanties. “It would be hard to even give an estimate,” he said. Interior Secretary Jesse Robredo flew to the disaster site near Pantukan town on Friday and also downplayed the initial estimate of the missing. “That might not be a very accurate number,” said Robredo, interviewed over ABS-CBN television in Pantukan. He said 80 percent of the population were recent migrants chasing instant riches from high gold prices. “Hopefully the search team there will be able to get it done in 48 hours,” Robredo added. Pantukan’s civil defense office said the toll now stood at 25 dead and eight missing, while 16 were rescued and treated at Mindanao hospitals. Meanwhile, Robredo announced the government would shut down up to 500 small-scale mines that dot the mountainsides around Pantukan and relocate the affected miners and their families, who will be given state financial aid. About a thousand mine tunnels operate in the area, he said. “Probably half of these are without permits, so we (he and the local officials) agreed that all the illegal tunnels will be closed down.” –Terra Earth **** burst Brazil: A **** burst in Brazil’s flood-hit northern Rio de Janeiro state Thursday, forcing the evacuation of nearly 4,000 residents, authorities said. Rising water levels on the Muriae River due to the torrential rains of the past few days caused the rupture of a bridge that serves as a **** protecting the town of Campos do Goytacazes, rescue officials said. “We have evacuated about 1,000 families (roughly 4,000 people) who have been brought to the fire department barracks and municipal shelters,” firefighter Joaquim Silva told reporters. The rising waters destroyed part of the bridge and opened a hole of nearly 20 meters (60 feet), flooding the Tres Vendas area in a matter of hours. Silva said the residents were warned in time and many families were able to salvage some of their belongings. Aerial television pictures showed the slow advance of flood waters and residents fleeing the area. Authorities said the water rose between 3.5 and four meters (11 to 13 feet). “From the houses, only the roofs were visible,” said Henrique Oliveira, of the local Civil Defense. Floods caused by heavy rains have left eight people dead and forced the evacuation of more than 15,000 people in the southeastern states of Rio de Janeiro and Minas Gerais, officials said. Exactly a year ago, flooding and landslides left more than 1,000 people dead or missing in the mountainous area of Rio de Janeiro state. -TD

Dutch village hammered by gale-force winds: Around 10 people were evacuated Thursday from a village in the northwest of the Netherlands as high waters threatened to overwhelm a dyke, local authorities said. But the **** at the village of Tolbert near the city of Groningen was expected to hold, Judith de Jong, a spokeswoman for the Dutch department of highways and bridges, told AFP. ‘We no longer expect the **** to give way but it also depends on the wind,” she said. Local authority spokesman Michiel Zijlstera told AFP that eventually 10 people had been evacuated from the village. He had earlier put the number at 100. But the situation remained ‘critical,’ he added, warning that strong winds were predicted late at night. Gale force winds reaching up to 110 kilometers (about 70 miles) an hour as well as heavy rains are expected along the Dutch coast. About a quarter of the country sits below sea level. The provinces of Groningen, North Holland and Friesland were under special alert and maritime traffic was badly disrupted at Rotterdam, one of Europe’s biggest ports where some 430 million tons of goods pass through annually. “Eleven vessels wanted to leave the port and two wanted to enter but were unable to do so because of the heavy wind,” said port spokesman. About 800 people have since returned to their homes after flood water receded. –Terra Daily