December 29, 2011 – FINLAND – A record number of households had to spend the night without electricity in the aftermath of Monday’s powerful storm. Up to 200,000 thousand people are suffering from power cuts, as new storm winds caused more damage. While the country’s southern and western areas were hit hardest on Monday, Tuesday’s storm has moved east. In northern Karelia, about 30,000 households were without electricity, while nearly 40,000 households in the Savo region had lost power. Northern Ostrobothnia and central Finland also suffered power cuts on Tuesday. Energy companies Fortum and Vattenfall say that repairs will likely last for days, especially when it comes to sparsely populated areas. Karoliina Lehmusvirta, Manager for Communications in Fortum’s Electricity Distribution unit told YLE News that the storm hit the network unusually hard. While Fortum cleared trees downed by Monday’s storm off power lines, more fallen trees were taking their place, as the winds continued to rage on Tuesday. “It is very likely that some of our customers won’t get electricity back for some days—and it may even be weeks for some. It is partly because our network has been destroyed so completely that that we need to build some parts of it up and get it running again,” Lehmusvirta explained. In addition to Fortum and Vattenfall, a number of smaller energy companies have reported power cuts. They advise people to stay clear of downed power lines as they may still be live and pose a danger of fatal electric shock. Under no circumstances should these lines be touched. -YLE

December 29, 2011 – ALASKA - Scientists in Alaska are investigating whether local seals are being sickened by radiation from Japan’s crippled ********* nuclear plant. Biologists at first thought the seals were suffering from a virus, but they have so far been unable to identify one, and tests are now underway to find out if radiation is a factor. Scores or multiples of twenty, ring seals have washed up on Alaska’s Arctic coastline since July. Their symptoms include: bleeding lesions on the hind flippers, irritated skin around the nose and eyes, and patchy hair loss on the animals’ fur coats. John Kelley, Professor Emeritus at the Institute of Marine Science at the University of Alaska Fairbanks said, “We recently received samples of seal tissue from diseased animals captured near St Lawrence Island with a request to examine the material for radioactivity. There is concern expressed by some members of the local communities that there may be some relationship to the ********* nuclear reactor’s damage.” Test results would not be available for several weeks. –ENE News 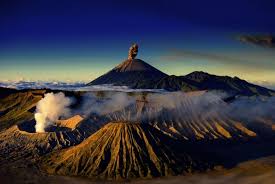 December 29, 2011 – INDONESIA – People living the vicinity of three volcanoes in East Java have been warned to be on the alert as they were showing signs of increased volcanic activity. The three volcanoes are Mt Ijen, Mt Semeru and Mt Bromo. East Java district disaster management head Timur Siswanto said the authorities were in a state of readiness to handle any volcanic disasters and had established command posts for relief work should any of the volcanoes erupt. He was reported as saying by the local media that Mt Ijen was showing the most activity and that people living in its vicinity had been warned not to come within a 1.5 kilometer raidus of the mountain. Besides the above three, five other volcanoes – Mt Gamalama (Ternate Island, Moluccas), Mt Papandayan (Garut, West Java), Gunung Karangetang (northern Sulawesi ), Gunung Lokon (northern Sulawesi) and Anak Krakatau (Sunda Strait) – were also reported to have started “rumbling.” –My Sinchew

December 29, 2011 – MIDDLE EAST – The Red Sea has a new inhabitant: a smoking island. The island was created by a wild eruption that occurred in the Red Sea earlier this month. It is made of loose volcanic debris from the eruption, so it may not stick around long. According to news reports, fishermen witnessed lava fountains reaching up to 90 feet (30 meters) tall on Dec. 19, which is probably the day the eruption began, said Erik Klemetti, a volcanologist at Denison University in Granville, Ohio. Ash plumes were seen emanating from the spot Dec. 20 and Dec. 22 by the Moderate Resolution Imaging Spectroradiometer, or MODIS, on NASA’s Terra and Aqua satellites. The Ozone Monitoring Instrument on NASA’s Aura satellite detected elevated levels of sulfur dioxide, further indicating an eruption. By Dec. 23, what looked like a new island had appeared in the Red Sea off the west coast of Yemen. “I am surprised about how quickly the island has grown,” Klemetti, who writes Wired’s Eruptions Blog, told OurAmazingPlanet. The volcanic activity occurred along the Zubair Group, a collection of small islands that run in a roughly northwest-southeast line. The islands rise from a shield volcano (a kind of volcano built from fluid lava flows) and poke above the sea surface. Scientists will keep a close eye on the new island to see if it has staying power. “Many times the islands are ephemeral as they are usually made of loose volcanic debris, so they get destroyed by wave action quite quickly,” Klemetti said. But the volcanic activity could outpace the erosion due to the wave action. Newly emerging islands aren’t unheard of. Other newly emerged islands include Surtsey off of Iceland, Anak Krakatau in the caldera of Krakatoa in Indonesia, and Hunga Tonga-Hunga Ha’apai in Tonga in the South Pacific. -MSNBC