2 Thessalonians 2:9-11 “The coming of the lawless one is by the activity of Satan with all power and false signs and wonders, and with all wicked deception for those who are perishing, because they refused to love the truth and so be saved. Therefore God sends them a strong delusion, so that they may believe what is false”.

Revelation 13:11-15 Is a warning to the reader that a false prophet will come and prepare the way for the Antichrist. “And I beheld another beast coming up out of the earth; and he had two horns like a lamb, and he spake as a dragon. 13:12 And he exerciseth all the power of the first beast before him, and causeth the earth and them which dwell therein to worship the first beast, whose deadly wound was healed. 13:13 And he doeth great wonders, so that he maketh fire come down from heaven on the earth in the sight of men, 13:14 And deceiveth them that dwell on the earth by the means of those miracles which he had power to do in the sight of the beast; saying to them that dwell on the earth, that they should make an image to the beast, which had the wound by a sword, and did live. 13:15 And he had power to give life unto the image of the beast, that the image of the beast should both speak, and cause that as many as would not worship the image of the beast should be killed. Global economic crash and the rise of the Antichrist


What could cause the Antichrist to rise up and take control of the world's economy? 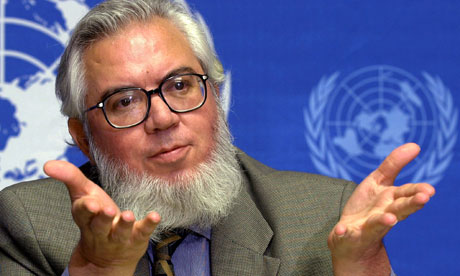 'We must act now to reverse the slow-down in employment growth,' International Labour Organisation (ILO) director general, Juan Somavia, Photograph: Martial Trezzini/EPA
The world's major economies are heading for a "massive jobs shortfall" by the end of next year if governments do not change their tack on policy, the International Labour Organisation (ILO) said in a study published on Monday"

In the report, prepared with the OECD for G20 labour ministers meeting in Paris on Monday, the ILO said the group of developing and developed nations had seen 20m jobs disappear since the financial crisis in 2008.

At current rates it would be impossible to recover them in the near term and there was a risk of the number doubling by the end of next year, it said.

Killer earthquakes on the ris September 25, 2011

The last decade has seen an intensification in earthquake activities. The 2004 Sumatra quake in Indonesia, which registered 9.3 on the Richter scale, has triggered stress in many areas. The Sikkim earthquake could be a manifestation of this stress. Earthquakes, some scientists believe, are on the rise. The earthquake in ********* in Japan had a magnitude of 8.9 and was the largest in the recorded history of Japan. The February 2010 Chile earthquake registered a similar magnitude as the Japan quake while the January 2010 quake in Haiti had a magnitude of 7.0 on the Richter scale. Prof D.K. Paul, an earthquake engineer with IIT Roorkee, believes the pushing of the Indian tectonic plate under the Eurasian plate (at the rate of 5 cm per year) results in stresses which over a period of time, manifest as earthquakes.

“The continents of Eurasia and the Indian sub-continent meet in the north east and the Sikkim region is located close to the fault line. This means tremendous strain is building up ever day,” said Paul. Environmentalists are not willing to buy this explanation in its entirety. Global Disaster Watch believes the Sikkim quake may have been induced by the 35 hydel projects being built across the Teesta river. The central government’s dream is to transform the north-east into ‘India’s future powerhouse’ by building about 168 dams in the region.